Posted on December 1, 2019 by Anne Petermann 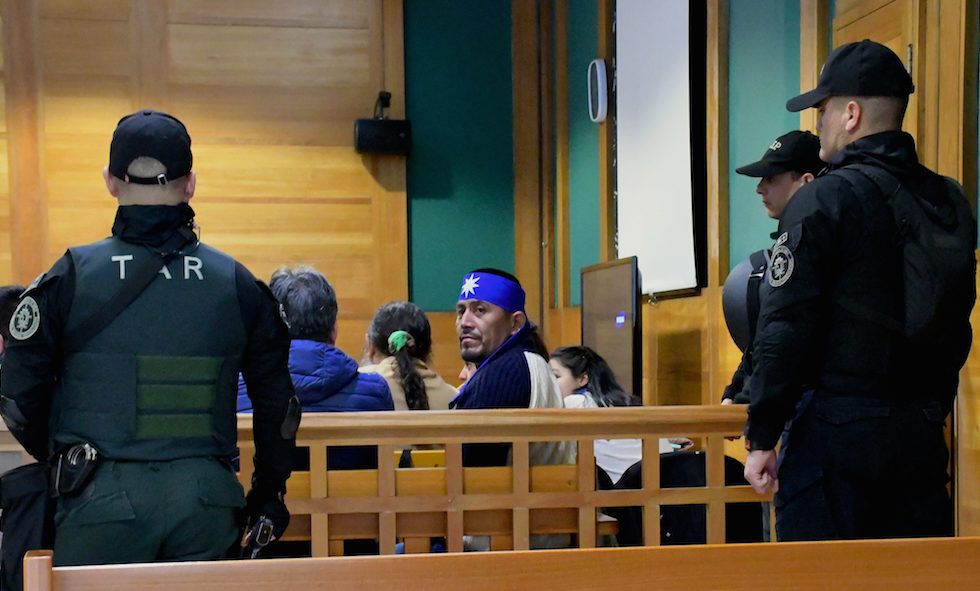 In April 2018, Mapuche Longo (leader) Alberto Curamil [looking back at the courtroom] was arrested on trumped up charges after he successfully stopped two hydro-electric dams. In 2019 he was awarded the coveted Goldman Environmental Prize. As COP25 begins, Longo Curamil’s trial continues in Temuco, Chile. Photo: Orin Langelle/GJEP

At this writing thousands of government officials, extractive industry executives and non governmental organization (NGO) staff are descending on Madrid for the UN climate summit. One of the most irregular aspects of COP25 is that the nation “presiding” over the meeting is not only unable to host the conference, the president of Chile is not even going to attend.

In the wake of scathing reports from Amnesty International and Human Rights Watch about the human rights violations in Chile, including sexual assault, torture, deaths from military action and indiscriminate police violence that has resulted in more that 200 people with severe eye injuries, it has been announced that Chilean President Sebastian Piñera will not be going to Madrid.

To highlight the gross irregularities of COP25 retreating to Madrid in an effort to hide from the world the violent and unjust realities on the ground in Chile, human rights, environmental justice and indigenous sovereignty advocates in Chile are already filing lawsuits to hold Piñera accountable for crimes against humanity.

In this context, environmental justice, labor union and indigenous leaders in Chile are demanding that Chile not be allowed to continue presiding over COP25.

The message from social movements is that Chile has no moral authority at this point in time (if ever, say the Chilean groups) to be presiding over COP25.

To highlight this call to hold the Chilean government accountable are these quotes from an article in the independent news source El Mostrador (elmostrador.cl).

“Chile has no moral authority at all to lead a global process when Chile is engaged in state terrorism at home.”

Another environmental leader has said that “if it was already reprehensible that Chile was going to host COP25, a false gesture that was nothing more than a smoke screen to hide environmental crimes, now it is absolutely disgusting that Chile retains the presidency of COP25 when such extreme human rights violations continue to happen every day.”

Another leader has said that “we need international civil society to support us in solidarity and to do all they can to internationally isolate the repressive regime of Sebastian Piñera.”

And this statement in detail from a Mapuche spokesperson (Sergio Millaman) with mapuexpress.org regarding the assassination of Camilo Catrillanca, a Mapuche leader who was shot in the back by the Carabineros in Nov 2018, explains this call for solidarity even further.

“The highest officials of the executive were complicit, silent, and helped cover up for the Carabineros (national military police) when they assassinated Camilo Catrillanca. One year later these same officials are responsible for more human rights violations in Chile. Piñera’s hands are stained with the blood of Catrillanca and the hundreds of people who have lost their eyes. For this reason Piñera cannot continue to preside over Chile, much less over COP25. The organizations that participate in this summit must demand that Piñera not preside over COP25. A person who is being investigated for human rights violations cannot preside over an international meeting.”

And as thousands arrive to Madrid for this international meeting, in the south of Chile the trial on fabricated charges of Mapuche leader and environmental defender Alberto Curamil continues. Curamil was the 2019 Goldman Prize winner and is now facing 50 years in prison for a crime for which there is an absolute absence of evidence connecting him to the events in question.

It is these examples from Chile that convey the seriousness of the situation and explain the call from affected communities in Chile to international climate justice advocates to stand in solidarity by denouncing COP25 for allowing Chile to preside over the conference. 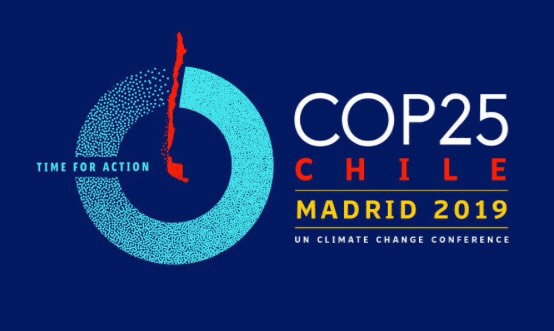 Graphic for COP25 looks to normalize highly irregular dynamic of Chile remaining as “president” of the meeting, even as human rights violations continue to occur from military and police violence being used to repress an increasingly volatile social movement against neoliberal policies in a country that has been celebrated as a case study in the supposed success of free market extractivist economies.