The Mapuche territory, the Wallmapu, was never settled by Spanish colonial forces. It remained an autonomous region up until it was partitioned and divided in the late nineteenth century by the newly-formed colonial states of Argentina and Chile. Today, the memories of violence, forced dispossession and relocation brought about by ‘Operación Conquista del Desierto’ in Argentina and ‘Operación Pacificación de la Araucania’ in Chile are as vivid as ever.

A few weeks ago, on Sept. 23, eight of the most prominent and radical-autonomist Mapuche leaders were illegally and violently detained by Chilean state forces as part of a joint operation conducted by the Chilean National Intelligence Agency (ANI) and the Carabineros (the Chilean national police force). None of these leaders were provided a formal detention order–the Carabineros argued that a ‘verbal detention warrant’ was sufficient.

As of Oct. 10, 2017, no evidence to the charge has been presented by the prosecution. Despite the lack of evidence, the Mapuche leaders must remain in preventive detention for at least four months until the charges are investigated. 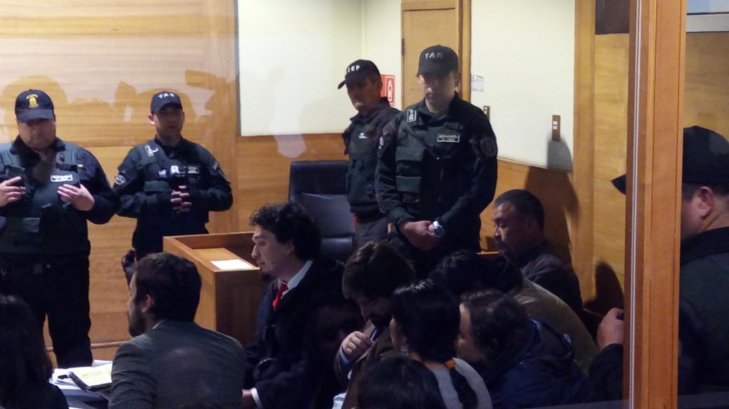 This has become a way of life in the communities of Wallmapu. Carabinero presence and intimidation abounds.

In the past, under similar circumstances, Mapuche leaders and community members (comuneros) had to remain in preventive prison for almost two years, only to be later acquitted of the crimes.

The legal instrument that allows undue process is the Anti-Terrorist Law or Law 18.314, enacted by Augusto Pinochet in 1984 to facilitate the crushing of political dissidence. This is by far one of the most brutal laws in Chilean history and it is evident that its permanence and broad utilization by democratically-elected governments, particularly from 2000 onwards, puts into question whether Chile is in fact is a democracy in the beyond-electoral sense of the term.

The law enables the prosecution to withhold evidence from the defendant for up to six months and allows the accused to be convicted based solely on unidentifiable witness testimony.

Despite the controversy embedded in this framework, there is an ongoing national debate unfolding today over whether this already-violent undemocratic process is ‘tough enough’ to fight Mapuche so-called ‘terrorism’.

Former President Sebastian Piñera recently argued that Law 18.314 “needs to be perfected to make it more efficacious”. He suggests “establishing the figure of the concealed agent as well as protected witnesses and informants […] the terrorists should not be given even a millimeter of advantage; they must be combated with all the rigor of the law”.

The reality is that the isomorphism of capital and state is systematically encroaching upon new territories using new technologies and mechanisms of power. These mechanisms are constituted of both underhanded symbolic components and substantial material violence. On the one hand, the ideological narrative around the figure of the Mapuche so-called ‘terrorist’ justifies the violent tactics espoused by the state, such as the recent Operación Huracán.

As a consequence, this discourse of terrorism propagated by the state ensures the smooth structural penetration of capital in the communal lands of Wallmapu.

For the Mapuche nation on the Chilean side of Wallmapu, the idea of a decolonized and free territory materialized in the late 1990s, when territorial revindication projects were set into motion by Mapuche movements in the southern provinces of Arauco and Malleco in the Araucanía Region. As Mapuche historian Fernando Pairican has explained, the decolonial mobilization emerged in the wake of Pinochet’s 1974 Decree 701 that paved the way for the rapid advance of large-forestry corporates over Wallmapu by providing them with extensive subsidies and overly generous tax incentives.

The return of democracy to power in the 1990s paradoxically strengthened Pinochet’s program for the systematic advance of capital in Wallmapu. Since then, the Chilean state has sponsored mass land-grabbing projects (mainly of forestry and hydroelectric nature) as well as functioned as a de facto guardian for the latifundista elite.

According to the provisos embedded in Decree 701, forestry companies today enjoy state subsidies of up to 75%. It is no coincidence then that two of the biggest forestry corporates, CMPC and Bosques Arauco, own by themselves over two million hectares while the whole Mapuche nation holds ownership of less than 500,000 hectares (and these statistics are based on conservative estimates).

Wallmapu is today dominated by capitalist monoculture plantation projects and militarization. Driving through Bío Bío and Araucanía regions, one can see kilometer after kilometer of eucalyptus and pine plantations, while encountering frequent carabinero (police) checkpoints, as well as military tanks and heavily armed Carabineros passing by.

The workings of the state-capital conglomerate is clearly reflected in recent events. On September 23, vast communities were violently raided while mainstream media provided a previously unseen live coverage of how the Mapuche leaders were arrested. Time and time again, images of Mapuche leaders were shown on national television. The terms ‘Mapuche terrorism’ and ‘national security’ were repeated endlessly.

It was a display of power; a case where the repressive state apparatus (use of helicopters, tanks, heavily armed Carabineros, etc.) was accompanied by a de facto corporate sponsorship of the detentions. According to Mapuche leader and founder of the Coordinadora de Comunidades en Conflicto Arauco Malleco (CAM), Héctor Llaitul and Ernesto Llaitul, member of CAM–both in preventive detention since September 23–Operación Huracán “has aimed to publicly delegitimize the Mapuche autonomist movement, through a communicational show that has sought to discredit […] the fair and dignified struggle for the revindication of our political and territorial rights”.