Posted on November 5, 2020 by Theresa Church 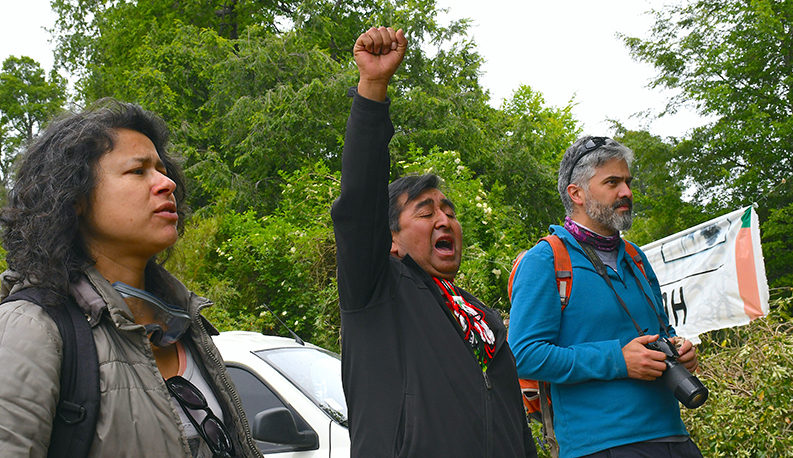 After the popular uprising began in October the following two Indigenous Mapuche communities, Liempi Colipi and Quilape López, began an re-occupation of their territorial land in southern Chile.  Photolangelle.org https://photolangelle.org/2020/08/8375/
(2019)

The sun of the austral summer rose warm on Santiago, the capital of Chile, as hundreds of thousands of women began to take to the streets on International Women’s Day. This traditional day of feminist mobilization celebrated annually on March 8 carried with it a special anti-patriarchal power in 2020 due to the fervent momentum that had been maintained on the streets of Chile since the social explosion in October of last year.

A performance of “A Rapist In Your Path” (Un Violador en Tu Camino) on International Women’s Day, 2020 in Santiago, Chile. The Spanish says, “The Rapist is you!” addressing the police.

Ultimately, that hot March day saw more than a million women flooding the streets of Santiago, with more than two million women in total gathered in actions spread up and down the long, thin country.

The massive street action was not unexpected, and was a coherent demonstration of the social movement’s demands to end police brutality and stop gender violence, demands that only strengthened as the social uprising continued. Also central to feminist demands is guaranteeing access to reproductive rights and health care in one of the more socially conservative countries in South America.

But the feminist demands, like the larger uprising, do not end with social reforms. They are part of an effort to topple the system, to end patriarchy, and to shut down the neoliberal experiment initiated under the Augusto Pinochet dictatorship that lasted from 1973 to 1990, supported by the US government.

Two key steps in this transformation are the removal of President Piñera, symbolic of the neoliberal thumb crushing the people. And, the rewriting of the Constitution, itself a holdover from Pinochet and symbolic of the reality that even restoration of formal democracy had not changed anything substantial for the people or their future.

The people have begun self-organizing into Constitutional Assemblies, seemingly endless gatherings to discuss what they really want, to dream about what a just future in Chile would look like and how it might be achieved. The Constitution is the frame, but the discussions go far beyond it.

The drive for systemic change is visible in one of the most culturally powerful expressions of the social uprising in Chile, the internationally celebrated performance of “A Rapist In Your Path” (Un Violador en Tu Camino).

This emblematic condemnation of systemic violence against women was created by the anarcha-feminist political arts collaborative, Las Tesis, based in Valparaiso. By early March, it was performed in dozens of countries around the world by tens of thousands of women.

As women surged along the country’s streets on International Women’s Day, a highly unpopular Chilean President Sebastian Piñera was facing the prospects of a resurgence of a militant street protest movement demanding his removal. He appeared to have no options for survival.

Then, the pandemic hit.

The first to react to the health crisis were the social movements. Protesters had learned effective self-organization during the months of militant street actions and put these skills to use in protecting vulnerable community members.

The government was slow to respond, and once it did, it became rapidly evident that the top priority of Piñera was not to protect public health, but to use the crisis to crush the social movements and to exact revenge on those sectors that had so successfully mobilized to put the Chilean elite in the political hot seat.

The planned late April plebiscite to vote for a new constitution, which had been offered by the Chilean political elite as an escape route to the demands for systemic change, was postponed until late October. Piñera hoped this pandemic-caused postponement would repress political activism.

“The pandemic situation was perfect for Piñera’s government to force people off the streets and into their homes,” recounts Chilean writer and environmental justice activist Alejandra Parra.

The organizing by the people, however, continues behind closed doors.

“Millions of people all along Chile were hitting this government so hard that politicians from almost all political parties made a peace agreement with clear steps to change the constitution,” Parra told us. She described how changing the constitution is “a deep and old demand that was almost unfeasible before the uprising,” and a sign that the uprising could achieve far greater things.

As a neoliberal experiment, the current Chilean constitution was written with the specific intent of granting extractive industry interests and the economic elite permanent control over resources and decision-making.

It provided lessons for the global elite that helped usher in future free trade agreements, from NAFTA to the WTO, that wrecked entire economies, and formalized the position of countries as resource colonies. Chile was the first to suffer the neoliberal yoke, but certainly not the last. A popular slogan of the uprising is, “Neoliberalism was born in Chile and in Chile it will die!”

Alejandra Parra is a life-long resident of Temuco, a cultural and political center in the south of Chile, in the heart of the Indigenous Mapuche Araucanía Wallmapu territory. She is a co-founder and organizer with the Environmental Rights Action Network (Red de Acción por los Derechos Ambientales—RADA), a grassroots organization fighting the installation of a giant so called waste-to-energy incinerator in Lautaro, a small town a short distance from Temuco with an active Mapuche community.

“President Piñera and his government were saved by the pandemic,” continues Parra. “He declared a state of emergency, which is still in effect, and he sent the military into the streets again, supposedly to help stop the virus, but guns cannot do that.”

Parra describes some of the prohibitions. “Under the state of emergency, gatherings of more than 50 people are forbidden, as is walking on the streets after 10 p.m., because of the curfew.”

The Piñera government’s effort to leverage the pandemic to squash political opposition is clearly seen in the legal persecution of emergent political and cultural leaders such as Las Tesis.

After they collaborated with Russia’s feminist performance group, Pussy Riot, in a video denouncing the systemic violence against women perpetrated by police forces across Latin America, they suddenly faced a criminal investigation by the Carabineros, the national police of Chile, for supposedly fomenting violence against the police.

The charges specifically mentions “A Rapist In Your Path,” a performance which has now gone viral, that graphically describes how the oppressive state apparatus perpetuates sexual violence, as being an attack on the authority of the police.

Such heavy-handed efforts to intimidate LaTesis have already been denounced by the Inter-American Court of Human Rights as a violation of the rights to freedom of expression.

The Carabineros and the Chilean military have become infamous for their treatment of the protesters—from raping women to blinding people to murdering Mapuche activists by shooting them in the back. Many of the major international human rights organizations have provided detailed accounting of these violations since the social explosion in October.

Beyond the social violence is the ecological violence. Like Trump, Piñera is also using the pandemic to streamline industrial investment in resource extraction projects. An analysis by the Observatory of Environmental Conflicts in Latin America (Observatorio Latino Americano de Conflictos Ambientales—OLCA) shows an exponential increase in the number of new investment projects submitted for environmental review—a review process that is now expedited.

The industrial model for the pulp-paper-bioenergy sector in Chile that emphasizes vast monoculture plantations of exotic tree species like pine and eucalyptus has for decades been denounced for creating environmental and social devastation. The loss of native forests, forced displacements, toxic chemical exposure and loss of fresh water are all documented impacts from the plantation model.

lQEDD is a scheme specifically developed to “offset” corporate pollution by monopolizing the carbon-rich forested lands of indigenous and rural communities. This World Bank interest in plantation expansion in southern Chile is exacerbating the militarization of the region, and the long-standing war of the state against the Mapuches.

“The government is bringing the military to protect tree plantations in Araucanía Wallmapu,” she says in the context of efforts to criminalize and repress local communities that are using land occupations, sabotage and other means to oppose the plantation companies and reclaim their ancestral lands stolen from them under the Pinochet Dictatorship.

The tragedy of the conflict of the plantation expansion with ancestral Mapuche claims to land bubbled over in early June with the murder of Alejandro Treuquil, a Mapuche community spokesperson who on the night before his death stated on the radio that he was receiving near constant harassment from the Carabineros.

The wife of Treuquil, Andrea Neculpan, later recounted that the Carabineros told her husband that there was little sense in looking for protection and that “they were going to kill him anyways.”

Embodying the great spirit of women that have been foundational to the uprising, Neculpan was firm. “I will continue to fight,” she is quoted as saying in an interview after the murder. “I will do everything I can so that we can know the truth. If it is the last thing I do I will get justice for him.”

Her spirit is emblematic of the uprising. The pandemic may have driven it off of the streets for now, but it is far from giving up. The people will continue their struggle to triumph over Neoliberalism in Chile and Wallmapu.

Perhaps, this struggle can be a model to the world.