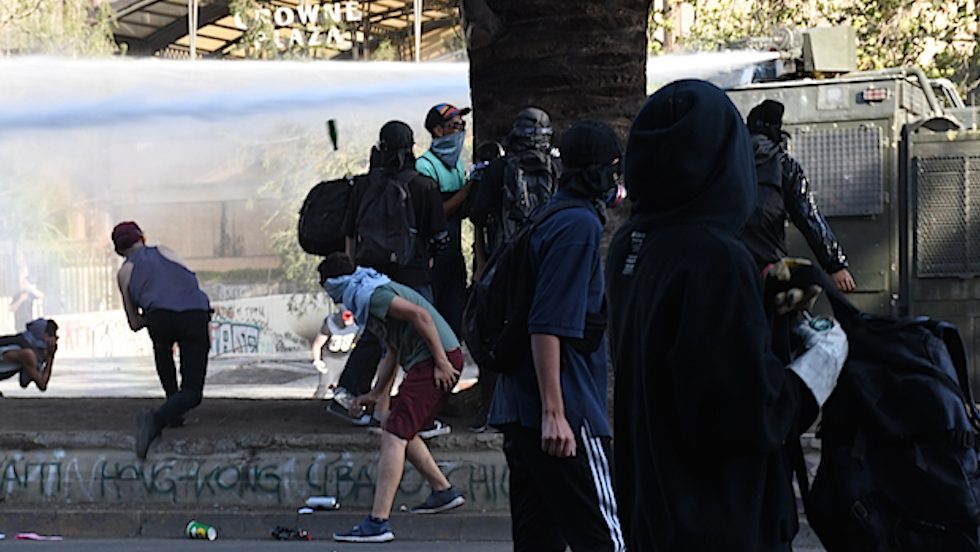 Images from the Front Lines

BUFFALO, NY – The ¡Buen Vivir! Gallery for Contemporary Art will present documentary photography and videography from the ongoing peoples’ uprising in Chile that started in October of last year. The images were shot by the gallery co-directors, Orin Langelle and Anne Petermann in the months of November and December, 2019 from the front lines of the uprising.

The Opening Reception of Chile: Peoples’ Uprising will be held during Allentown’s First Friday event on April 3 from 6 to 9 p.m. Wine and hors d’oeuvres will be served at the ¡Buen Vivir! Gallery for Contemporary Art, 148 Elmwood Avenue at Global Justice Ecology Project space.

A massive popular uprising in Chile began on October 18, 2019, and continues to this day. Millions are demanding a new economic and political system in Chile and a new Constitution. Chile’s existing Constitution was written during the Pinochet Dictatorship, ushered in during a military coup supported by the U.S. in 1973.

Today Peoples’ Assemblies are taking part in all regions of Chile to create a process that will rewrite the new constitution. Chile’s President Piñera is trying to take control of this process and to crush the protests with extreme violence and repression.

Petermann and Langelle documented street protests including clashes between activists and Carabineros (national police) in the cities of Santiago and Temuco.

As of the first week of March of this year reports state that since the uprising began in October, 36 activists have died, more than 28,000 Chileans have been detained and 4,080 minors arrested. Additionally over 11,000 have been injured by the Carabineros. Shotguns loaded with rubber-coated metal pellets deliberately aimed at protesters’ faces have caused 445 serious eye wounds. Many people have partial or complete loss of vision in one or both eyes. In addition, several protesters have been run over by armored vehicles.

Langelle and Petermann also traveled to two indigenous Mapuche land re-occupations, where communities had taken back 1,500 hectares of their ancestral lands, stolen from them during the dictatorship. On U.S. Thanksgiving, they took photos and video interviews afterCarabineros shot and teargassed people in the re-occupation.

On Tuesday, April 7, Jim Shultz, Executive Director of the Democracy Center, will launch his newest book My Other Country, Nineteen Years in Bolivia? in the BV Gallery from 7 – 9 p.m. The full moon event commemorates the 20th anniversary of the Cochabamba Water Revolt in Bolivia that Shultz was involved in and helped publicize.

The gallery is free and open to the public.

← Toward an Indigenous Feminist Anti-Colonialism: Talk April 2
The Guardian: Chilean Women To March In Protest Again →