Carabineros with shields between the police vehicles as the people watch. Photo: Langelle/GJEP 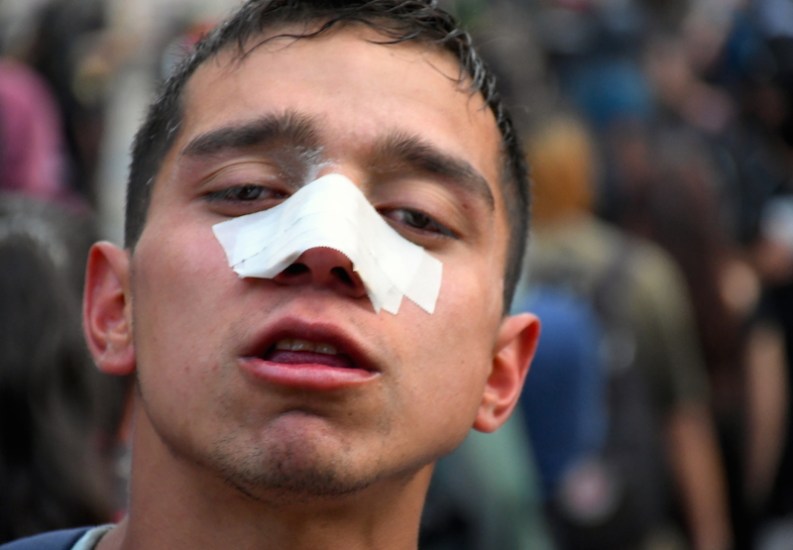 New York – On July 30, a virtual exhibit opening by photojournalist Orin Langelle with videos by Anne Petermann will feature their images and stories from the popular protests in Chile in November and December of last year.

In October 2019 people across Chile, led by students and youth, rose up in a massive popular uprising known in Chile as “the awakening.” One of their demands is to get rid of the neoliberal economic model imposed by Dictator Augusto Pinochet in the 1970s. Petermann and Langelle originally planned to be in Chile for the UN Climate Conference in Santiago, but that was moved due to the uprising. They stayed in Chile to document and spread the word about the uprising to an international audience. They were there in November and December and shot dozens of videos and thousands of photos at the street protests in Santiago and Temuco.

The Carabineros (Chilean National Police) used excessive violence against the protesters including shooting people in the eyes with rubber coated metal pellets fired from shotguns, sexual attacks on women prisoners, and excessive use of teargas and water cannons – especially targeted at medics helping those injured by the police.

“Since the murder of George Floyd, police tactics that focus on use of excessive violence against people rising up for justice is being seen across the U.S.,” said activist photojournalist Orin Langelle. “Now Federal Police have been deployed in several U.S. cities. This is looking like police state actions quite and possibly martial law.”

Langelle draws parallels between what he documented in Chile and what is happening across the U.S. saying, “In Portland, a new secret paramilitary force of unidentified officers in camouflage are kidnapping people off of the street and forcing them into unmarked cars. This tactic has been termed ‘Pinotchet’ed’ by Esquire Magazine, in reference to the dictatorship in Chile from 1973 to 1990, supported by the U.S., which used secret police forces to disappear tens of thousands of dissidents. The elimination of Pinochet’s Constitution, still in force in supposedly democratic Chile, is a major focus of the popular uprising there now.”

Joining Langelle and Petermann will be Chilean activist Alejandra Parra from Red de Acción por los Derechos Ambientales (RADA) from Chile, along with Gary Hughes of Biofuelwatch in California. The four formed the documentary team co-sponsored by Global Justice Ecology Project and Biofuelwatch that was in Chile over November and December of last year.