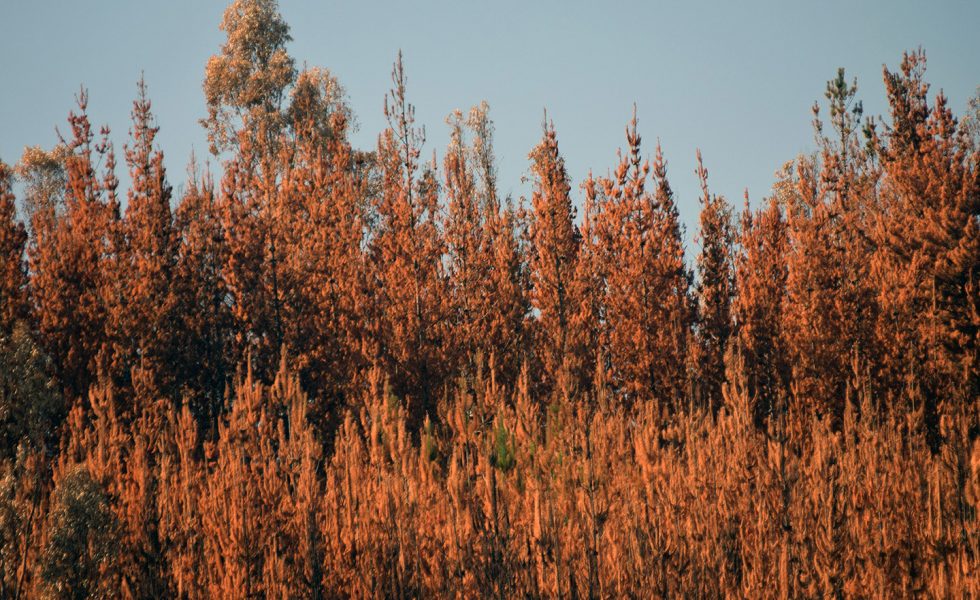 Caption: The passing of the Forest Ordinance 701 (Decreto Ley 701) in 1974, during the reign of General Augusto Pinochet, subsidized the expansion of tree plantations, giving away the National Forestry Corporation. This initiated the quick expansion of monoculture plantations of pine and eucalyptus trees for paper manufacturing and timber. Since then, many corporations have bought land and destroyed the once abundant native forests.  Photo: Langelle

Note: The following piece was written by GJEP ally Biofuelwatch to explain the deep connections between the massive popular uprising in Chile against the countries crushing neoliberal policies, land grabs and repressive laws left over from the Pinochet Dictatorship–policies that still govern the nation.  Chile was to be the perfect host for the UN Climate COP which has as its focus the expansion and further legitimization of market-based policies based on the neoliberal commodification of the earth, an expansion of industrial tree plantations as a “natural climate solution” and more unjust forest carbon offsets.

Today Chile announced it will not host the COP due to the peoples’ uprising.

Biofuelwatch staff members have been watching recent events in Chile very closely in preparation for participation in events around COP 25, planned for Santiago in early December. Here is the first in what we hope to have as a series of brief postings on the extremely fluid and rapidly changing political landscape in Chile and how it impacts the substance and dynamics of the United Nations climate meetings.

Recent events in Chile have put the upcoming United Nations climate meetings in Santiago de Chile in doubt. In a fully unexpected convulsion of street action and spontaneous mass protest, the nation of Chile has passed from being a global symbol celebrating corporate globalization and economic modernity into a bonfire of disturbance at the center of a continent wide fever of social unrest. In little more than a week the actions in Chile progressed from an animated and aggressive student protest against subway fare hikes to a nationwide mobilization demanding structural changes in what is one of the most economically unequal societies on the planet.

This unrest in Chile has taken the global climate policy establishment by total surprise. No one thought that in the weeks immediately previous to international climate meetings Chile would enter an unprecedented phase of political action dedicated to exposing the erroneous assumptions underpinning the glitter and shine facade of a predatory economic model.

Plans for holding the United Nations Framework Convention on Climate Change 25th Conference of Parties in Santiago de Chile only arose because of the climate denying Bolsonaro regime in Brazil discarding their opportunity to hold the COP 25. Holding COP 25 in Santiago de Chile was received as an exciting solution by the United Nations. Current Chilean President Sebastian Piñera, always the salesman, who was looking for another opportunity to sell the world on the Chilean economic miracle, proposed the option.

And, “why not?” thought the global economic elite that controls the UNFCCC process. Chile is after all a country that has long been held up as a success story for the new global economy, the “tiger” of Latin America. Holding COP 25 in Santiago de Chile, the capitol of free market ideology, was going to be an opportunity to highlight the future of markets-based climate policy and the supposed role of the private sector in raising “ambition” for climate “action.”

Yet, the harsh reality of a free market economic system that benefits a small elite with immeasurable wealth while relegating multitudes of vulnerable and marginalized communities to a permanent state of precariousness raised it’s head and upended not only normality in Chile, but also in the UNFCCC process.

Chile is now living its most serious political crisis in decades, since the departure of the military government in 1990. A ‘state of exception’ was declared, a curfew implemented in many regions through out the length of the country, and the military was called into the streets of a nation understandably traumatized by the violence of an unrepentant military dictatorship. Police and army troops have been indiscriminate in their use of violence against the people on the streets. Thousands of people have been detained, hundreds of people shot and injured, and at least 20 people have died, including fatalities due to the repressive actions of the authorities. The United Nations has sent a mission to Chile to investigate the reports of human rights abuses.

The Chilean people responded to the violence and the suspension of their basic rights by coming out in droves on Friday Oct 25 in what was by far the largest street demonstration in the history of the country, with as many as 1.5 million people filling the main boulevard of Santiago demanding structural changes to address severe economic inequity and the injustice of a political constitution written and established during the military government.

Front and center to this historic uprising are the demands of those communities, especially the indigenous Mapuche peoples of the south of the country, who are living on a daily basis with environmental injustice. For the Mapuche nation it is the reversal of the land grabbing and usurpation of territory perpetuated by the highly monopolized monoculture tree plantation industry that is central to their demands for structural change. It is this festering sore of environmental injustice and how COP25 should respond to inequity that has now been raised to a level of importance that would have been nearly impossible without this organic uprising in Chile against a predatory economic model.

Hosting COP25 in Chile was from the moment it was announced a concern for communities, in Chile and around the world, that advocate bringing an end to the ecological damage and cultural genocide that are embedded in the exotic tree species plantation model. Communities were facing head on the dilemma of whether COP25 would be leveraged to greenwash inequality in Chile and elsewhere by not only ignoring the realities on the ground of the “green desert” of the destructive monoculture plantation model, but in advancing policy that would perpetuate and further expand this model as a climate “solution.”

The sad truth is that due to the incessant policy and rhetorical focus on “natural climate solutions,” and the prevalence of “markets-based mechanisms” embedded in Article 6 of the Paris Agreement, there are still many indications from the global climate establishment that exotic trees species plantations are actually considered a climate solution – contesting these perverse assumptions about plantations was going to be an imperative for civil society engaging with COP25 and parallel activities.

The uprising in Chile has now raised the issue of equity and social justice in the UNFCCC process to a level that would have been impossible in status-quo conditions. In that sense the recent “despertar” (awakening) in Chile could very well be the best thing that could have ever happened for affected communities to hold COP25 accountable, regardless of whether the meetings actually happen in Chile or not – now the question of equity is clearly nested in the question of whether or not the social unrest makes even holding the COP25 in Santiago de Chile a viable option.

It is untenable that holding COP25 in Chile be used to “greenwash” the recent human rights abuses of the current government of Chilean President Sebastian Piñera. It is also untenable to consider holding COP25 in Santiago de Chile if the rights to free speech, movement and assembly are at risk because of so-called “security” concerns. If COP25 is to be held in Santiago in this political moment there have to be guarantees that civil society and especially the communities of Chile that are subject to environmental racism and climate injustice are allowed to gather, organize and congregate freely. Equity cannot be a word that is thrown about with carelessness and as a rhetorical tool to disguise the business as usual tendencies of climate agreements that still sell the world on exotic tree species plantations as a “natural climate solution.”

Chile has set the standard now with the society wide organic awakening against inequality. In the spirit of this moment if COP25 is to be hosted in Chile the proceedings must respond to the growing demands of Chile and the rest of the world that true climate action must be centered on equity. Anything less is window dressing. Is the global climate establishment prepared to rise to the occasion? The next days and weeks will determine to what extent equity is truly a priority in climate action and to what extent the defense of human rights is considered a top level priority – or, if indeed the UNFCCC process really is designed to protect business as usual under the guise of global climate diplomacy. Without a doubt, it is the recent unrest in Chile that has assisted in elevating these questions to the front of the discussion.

← Chilean People Rise Up: No More Neoliberalism and Dictatorship Laws!
Analysis of the Bolivia Uprising →