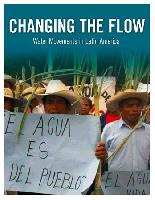 The booklet is comprised of individual and collective stories throughout Latin America.

Here is a reprint of the INTRODUCTION

THE RISE OF WATER ON THE GLOBAL AGENDA

In case after case around the world, water has been turned into a profit making commodity – preventing access to the most essential element on Earth. Pollution, corporate takeover, and the mismanagement of water ecosystems have resulted in dire water poverty and scarcity in many parts of the world.   Private ownership of water and water-delivery systems does not resolve, but rather, compounds the longstanding and deep-seated abuse, neglect, mismanagement, and exploitation of water.

Mark Twain said, “Whiskey’s for drinking, water’s for fighting over.” As you read this, corporations and governments the world over – backed by their allies in the World Bank, IMF, and World Trade Organisation – are putting ‘for sale’ signs on urban and rural water systems. In 90 percent of the world, the state still controls water, and even where it is partnered with a community, it often fails egregiously to protect earth rights and human rights. (We can see this in the deaths of 4000 to 5000 children each day as a result of lack of access to safe water.)

Despite this bleak reality, citizens are both effectively resisting threats and creating alternatives.  They are bringing fresh perspectives, building the power and the rights of the citizen and the worker, and creating innovations in public and community water systems.

A global uprising is underway to ensure water as a protected part of the global commons. Popular pressure is winning victories, setting precedents and winning inventive guarantees to free or low-cost, accessible, safe water.  In one of many examples, in April, 2008, after a many-year fight involving political and legal pressure, the grassroots Coalition Against Water Privatisation won a lawsuit granting the township of Soweto, South Africa the legal right to tap water for all, no matter how poor. Communities across the U.S. and Canada have risen up and demanded that their representatives rescind sweetheart deals that allow Nestlé and other corporations to pump water from rivers, lakes, and aquifers and then sell it as bottled water for up to 1000 times the cost of tap water. Sustained mobilisation has kept corporations from purchasing municipal water systems in many parts of the worlds. The Council of Popular and Indigenous Organisations in Honduras used courts and direct action to stop corporations from building hydroelectric plants on their rivers.

Popular pressure is forcing some governments to step up, too. In November, 2008, eight South Asian states (India, Afghanistan, Bangladesh, Bhutan, Maldives, Nepal, Pakistan, and Sri Lanka) issued a joint declaration recognising that access to sanitation and safe drinking water is a basic right, and making sanitation a national priority. Nationalconstitutions in Uruguay, Ecuador, and Bolivia now enshrine water as a human right and bar it from being sold into private hands. As of this writing, water rights activists in Colombia have finished collecting the requisite number of signatures to amend the national constitution, and are lobbying the Parliament for a referendum; Costa Rica has a draft bill pending votes. Mexico and El Salvador have started campaigns to lobby their governments to deem water a human right in their constitutions. In 2005, after years of protest by residents and international allies against a Coca-Cola plant for extracting so much groundwater that it dried up many wells and polluted the groundwater in the village of Plachimada in Kerala, India, local government decreed that residents’ access to water trumped corporate power, and ordered the operation shut down.

Elsewhere around the world, people and governments are fighting dams, water pollution, and other destructive development. Rather than allowing this development path to continue, they are protecting this precious ecological resource through alternative water management practices such as water conservation, ecological sanitation, reforestation, rainwater harvesting, water catchments and retention structures, and watershed protection.

In cases where water has been barred – or wrested back – from corporate ownership, various management models are in use.  Though the challenges are immense, villages and cities are meeting various needs and contexts through public management, cooperatives, public-community partnerships, and community management. In addition, public-public partnerships are being developed to diffuse good practice and learning.  These systems of water service delivery stand out as the only viable and just solutions for the dire challenges in water and sanitation. They are the only vehicles though which those citizens and those workers can take part in controlling and managing their own water. They require government transparency and the willingness to ensure both participation by the citizenry and democ- racy in the workplace (thus allowing workers and trade unions to actively participate and co-manage water systems).  These are the ingredients that will make it possible – and in some cases, are making it possible – to ensure the right to water for all, especially for the poorest and most vulnerable.

Integral to the fight for water is another fight, equally fundamental, for a new model of citizen power and a new accountability from the state. Oscar Olivera, a spokesperson for the popular movements that ejected the Bechtel Corporation from Bolivia in 2000, is fond of saying that, “Behind the fight for water is the struggle for democracy.” But democracy, in this sense, is not limited to the election of officials to national office in hopes that they will represent the will of the people.  For the water movements, true democracy demands a redefinition of politics, and of the nation itself as a political structure. Saúl Atanacio Roqué Morales, an elder statesman for control of indigenous water from Mexico, re-minds us that, “The nation is us, the people.”

The movement is discovering, too, a new definition of citizenry that goes beyond national boundaries.  Throughout our region in the Americas, we are making important steps toward building alliances that, at the same time, respect the differences and diversity of experiences. We are using globalisation to our favour, to bring us in in close contact and solidarity with each other. As Salvadoran water warrior Ana Ella Gomez says, “We are many voices, one echo.”

In a world where wealth, resources, and political power are usually concentrated in a small group, the wave of victories in water battles shows what highly informed and organised popular movements can do. The war is far from won; in most parts of the world, water privatisation is still the dominant trend.  And where water remains public, it is often in the hands of corrupt or incapable public authorities that refuse to be transparent or to allow participation. But we are seeing that the fi ght for access to clean, af- fordable water can be won. To quote Ana Ella again: “We are constructing a new definition of hope.”

In this booklet you will hear from some of the most visionary water warriors in Latin America. We hope you will be inspired by the visions, experiences, and lessons they have to share. We also hope that if you are not already, you too will become a water warrior to guarantee that water be protected as the fundament of life itself, for human beings and the whole planet.