Call for Solidarity for Activists in Norway 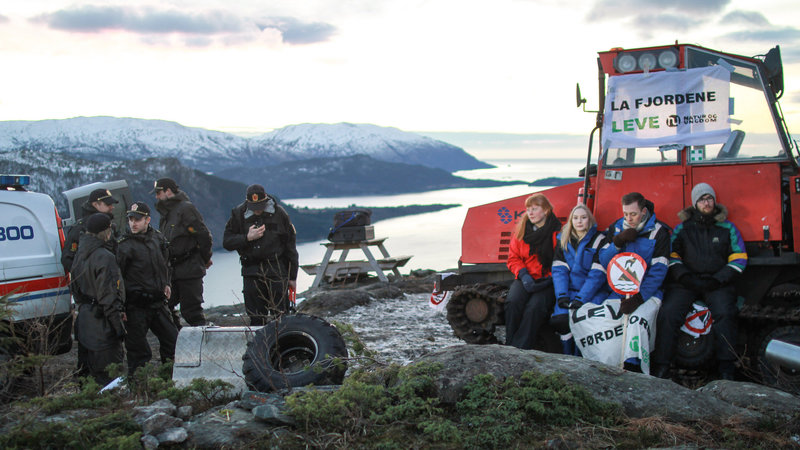 Via SaveTheFjords.com
For three weeks local and environmental activists shut down the exploration mining on top of Engebø mountain in the west of Norway. The Norwegian government has given Nordic Mining permission for a open-pit mine, that will dump more then 250 million tonnes of mining waste, including chemicals and heavy metals, in the Førde fjord.
The blockade started on the 1st of febuary, and lasted until the 20th of febuary. During the three weeks over 100 people participated in the actions, and 80 people got arrested, with a total of fines close to 100 000 EUR. The activists blocked the entry road to the mountain and the exploration machinery through non-violent direct actions.
The second day of the blockade, the CEO of Nordic Mining, Ivar Fossum, told the media that «They do what they think is right. These are great and committed youths». On Tuesday 22. of February, two days after the blockade was finished, the same CEO confirmed that Nordic Mining will file a multi-million lawsuit against the activists.
The group of people who occupied the drilling machinery were between 16 and 62 years old, but the majority of us were youths and students. None of us have the kind of money that Nordic Mining is coming after us for. And if their lawsuit goes through, we stand in danger of losing our homes, any money we might have been able to set aside, and go personal bankrupt.
That’s why we can’t let them win, and we can’t let them get away with it. This is about so much more then the 80 of us who got arrested – it’s about the right to protest. And the importance of civil disobedience as a security valve in our democracy. If this lawsuit goes through, then we stand in danger of creating a dangerous precedent where big companies can go after activists when they dare to stand on the wrong side of the law – but the right side of history.
That’s why we need your help, and we need it now. We need to create a massive pressure against Nordic Mining, that will force them to drop the lawsuit. I’m hoping you can help us defend the right for non-violent direct actions, and at the same time help us from going bankrupt.
Here are some easy things you can do:
IF YOU HAVE 30 SECONDS:
– Sign the petition against the lawsuit at http://bit.ly/tellnordicmining
– Share the petition (http://bit.ly/tellnordicmining) with your friends and network
IF YOU HAVE SOME MINUTES
– Read more about the issue on www.savethefjords.com and share it on social media
– Go to Nordic Mining’s Facebook Page and write a review of them, telling them exactly what you feel about the plans for a lawsuit
print