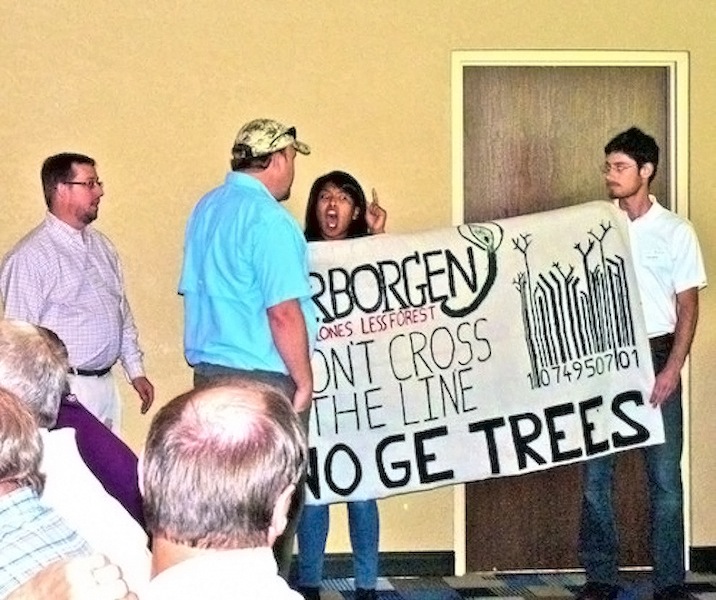 “We sent a clear message to participants — plant genetically engineered trees and expect resistance,” said Keith Brunner, an organizer with Global Justice Ecology Project. “Invasive GE eucalyptus, planned for deployment across the US South, would irrevocably devastate native ecosystems, exacerbate droughts and lead to catastrophic firestorms. This must be stopped before it is too late.”

The US Department of Agriculture (USDA) is expected soon to accept public comments following the release of its draft Environmental Impact Statement on ArborGen’s request to commercially sell millions of potentially flammable and invasive genetically engineered eucalyptus trees, for planting across the US South from South Carolina to Texas. The USDA will ultimately issue a final decision approving or denying ArborGen’s request.

Stephanie Hall, a member of the Toad Clan of the Seminolee Miccosukee People, also pointed out the link between ArborGen’s plans and the history of genocide against Indigenous Peoples in the region: “ArborGen could not be planning for the development of vast industrial plantations of genetically engineered eucalyptus trees on land in Florida without the previous history of genocide and forced removal of Indigenous men, women, children, plants and animals from the region. People should not be complicit in this — we must ban genetically engineered trees.”

“Early last year, the USDA received nearly 40,000 comments opposing ArborGen’s GE eucalyptus, with only a handful received in favor,” stated Anne Petermann, Executive Director of Global Justice Ecology Project.  “Then in May of 2013, the international Tree Biotechnology conference in Asheville, NC was protested and disrupted for almost a week by hundreds of protesters. These protests and today’s disruption are only the beginning. As the USDA considers ArborGen’s request to legalize GE trees, opposition to these trees and the threats they pose to communities and native forests continues to grow.”

Check out the excellent video made by our team in Tallahassee:

Photo: Stephanie Hall, a member of the Toad clan of the Seminolee Miccosukee People, interrupts the ArborGen event. Photo: Will Bennington/GJEP