Note: Suzano’s subsidiary FuturaGene won permission from the Brazilian Biosafety Commission in 2015 to produce GE eucalyptus plantations.  This is also mentioned below.

The MST repudiates the agribusiness development model, which does not contribute to social, cultural and environmental areas.

Against the production model of agribusiness and in defense of agrarian reform, thousands of workers and workers Landless occupied in the early hours of this Monday (13 June), the factory of Suzano Papel e Celulose, in the municipality of Mucuri, in Southern Bahia .

The Landless repudiate the agribusiness development model, which does not contribute to social, cultural and environmental areas. “The company only exploits our lands, removing and exporting the wealth. They further emphasize the illegitimacy of the de facto government of interim president Michel Temer (PMDB).

Suzano is part of a group of transnationals, which arrived in the region and set up the eucalyptus plantations by deleting the existing production diversity in the territory. Today, the basic products come out and prices have skyrocketed.

The few areas cultivated by peasant families have their production affected because of the indiscriminate use of pesticides, which contaminate soil, water and air. Moreover, monoculture eucalyptus plantations have caused the exodus of thousands of peasant families and peoples.

According to the national leadership of the MST, the current proposal to expand the plant seeks to triple its production and use transgenic eucalyptus, which will increase significantly the social and environmental problems, which for decades eucalyptus plantations have caused in the region.

“The speech used to justify the investment in the expansion of the plant is the same as the 80s and 90s, which announced that many jobs, progress and development would be generated, but the social and environmental reality that exists today is quite another story.” 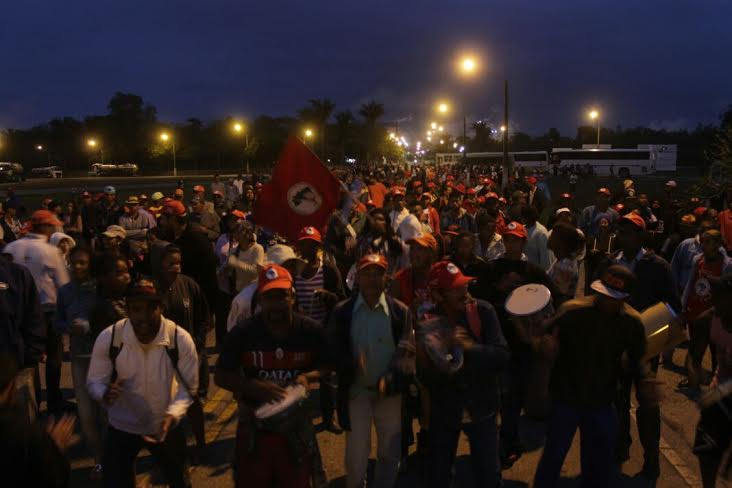 The cities of Teixeira de Freitas and Eunápolis suffer a disorderly growth and without planning, thus causing an increase in unemployment, violence and poverty.

In addition, Suzano’s large eucalyptus plantations are killing the springs, tributaries and rivers. The company has also caused environmental damage, example, was the invasion of Eucalyptus insects in various cities of the region, causing diseases.

The Mucuri River, which bathes the city and other cities in the region is at its lowest level in history. Not only the death of its tributaries, caused by eucalyptus expansion, Suzano has also released tons of chemical, causing the extinction of aquatic fauna and flora.

“Oust Temer. The government is the people! “

The action is part of the National Day of Struggle against Temer government, which in the first weeks has caused many setbacks in rights won by the working class, including eliminating the Ministry of Agrarian Development (MDA).

In this occupation, workers demand the return of MDA and repudiate the political model adopted through privatizations and cuts in fundamental public policies that give the working class access to constitutional rights.