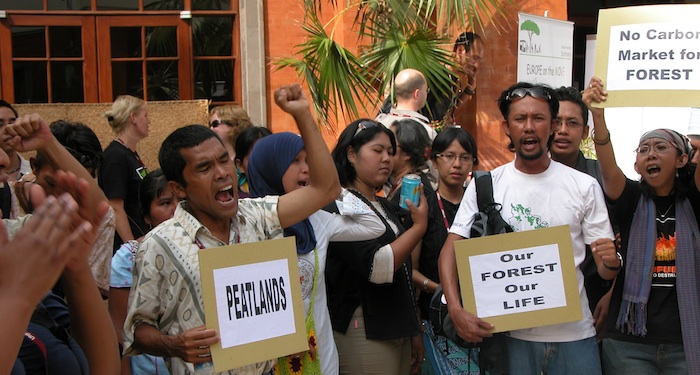 Protest at the UN Climate Conference in Bali Indonesia outside of a World Bank press conference announcing the “Forest Carbon Partnership Facility” a program designed to encourage countries in the Global South to sell the carbon in their forests to supposedly “offset” carbon emissions from big polluters in the Global North.  Photo: Anne Petermann (2007)

Global Justice Ecology Project has been at the leading edge of the critique of forest carbon offsets since they were formally launched as REDD, and backed by the World Bank at the UN Climate Conference in Bali, Indonesia in 2007.

Since then we produced a film “A Darker Shade of Green: REDD Alert and the Future of Forests” to highlight the impacts of REDD on Indigenous Peoples, and worked closely with Indigenous Environmental Network, Global Forest Coalition, Climate Justice Now! REDD-Monitor, Climate Justice Alliance, World Rainforest Movement and many others to expose the dirty lie of forest carbon offsets.

We are very glad to see this article in Bloomberg exposing this sham.

These Trees Are Not What They Seem

How the Nature Conservancy, the world’s biggest environmental group, became a dealer of meaningless carbon offsets.

At first glance, big corporations appear to be protecting great swaths of U.S. forests in the fight against climate change.

Forty miles away, Walt Disney Co. has spent hundreds of thousands to keep the city of Bethlehem, Pa., from aggressively harvesting a forest that surrounds its reservoirs.

Across the state line in New York, investment giant BlackRock Inc. has paid thousands to the city of Albany to refrain from cutting trees around its reservoirs.

JPMorgan, Disney, and BlackRock tout these projects as an important mechanism for slashing their own large carbon footprints. By funding the preservation of carbon-absorbing forests, the companies say, they’re offsetting the carbon-producing impact of their global operations. But in all of those cases, the land was never threatened; the trees were already part of well-preserved forests.

Rather than dramatically change their operations—JPMorgan executives continue to jet around the globe, Disney’s cruise ships still burn oil, and BlackRock’s office buildings gobble up electricity—the corporations are working with the Nature Conservancy, the world’s largest environmental group, to employ far-fetched logic to help absolve them of their climate sins. By taking credit for saving well-protected land, these companies are reducing nowhere near the pollution that they claim.

← New Myth-Buster From CEO and Allies on the Energy Charter Treaty
Happy Holidays from GJEP! — Looking forward to 2021 →