Journalist Josh Schlossberg researched six months of local newspaper coverage of biomass energy, based on a Google search of “biomass,” and found that 76% of the reporting completely ignored any and all mention of health and/or environmental impacts of biomass energy, nor did they quote any opposing viewpoints. His research was part of a May 7 piece in Earth Island Journal, “Media Bias for Biomass Energy?”

Other journalists think there’s more to it than that. “It’s not at all odd or strange that the corporate-funded news media would detail the positives far more than the negatives of biomass energy, or really any other business-centric topic,” said Steve Horn, an independent investigative journalist who covers energy, climate, and environmental topics in his work. “You don’t say mean things about those whose bread you eat.”

INDONESIA – The RSPO’s Complaints Panel has upheld the Forest Peoples Programme in its complaint against Golden Agri Resources, which was seeking to expand 18 of its operations in Kalimantan. After concluding that it has ‘reasonable grounds’ to conclude that the company is in violation of several RSPO norms, the latest ‘determination’ by the Panel notes, “The Panel hereby prohibits GAR from acquiring or developing any new areas until this complaint has been dealt with to the satisfaction of the Complaints Panel.”

Repeated field surveys by Forest Peoples Programme with local partner, LinkAR-Borneo, show that the company has sluggishly responded, after the NGOs had repeatedly raised concerns first with the company and then the RSPO. The NGOs found that the company had filed to expand its operations after it had taken land without proper consent, had not completed required High Conservation Value assessments and was of questionable legality. The Complaints Panel rules that, “GAR must also take remedial steps to correct any shortcomings in its land acquisition process with the affected communities… and insists that GAR must honor its commitment to allocate 20 % of the land for the smallholders as it has promised to do…”

Agus Sutomo Executive Director of Pontianak-based LinkAR Borneo said, “We need the Government to take note of this decision. Chaotic law enforcement and handing out permits for oil palm plantations on indigenous peoples’ lands without even informing them in advance is bad for people, bad for forests and bad for Indonesia.

In past years NGOs have expressed growing dismay that the RSPO was failing to enforce its standards and turning a blind eye to multiple violations.

We hope this decision will now persuade GAR/SMART that it has to renegotiate with communities where it has taken over their lands without their informed consent, says Marcus Colchester, Senior Policy Advisor of the Forest Peoples Programme. We are greatly encouraged that the RSPO is upholding its standard. We need to eliminate all land-grabbing from the RSPO-endorsed supply chain.

“I hope the Goldman award will bring world recognition to help us protect our land,” Baptiste told DeSmog Canada.  “We’d like to improve our lives, but our land and water comes first.”

See the full article on Baptiste on DeSmogCanada.Ca here. 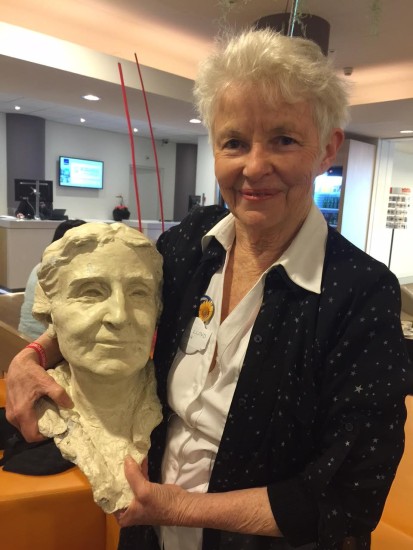 Lloyd is pictured with the bust of her grandmother, American pacifist, suffragist, and feminist Lola Maverick Lloyd, who attended the first Hague women’s conference 100 years ago in 1915.  For more information on Lola Maverick Lloyd, see this piece by Robin Lloyd at WorldService.org.

See video highlights from the event here and learn more about WILPF’s mission to challenge militarism, invest in peace and strengthen multilateralism here.

Take a stand against GMO mosquitos in the Florida Keys

The Florida Keys Mosquito Control District announced that it will now wait for the Food & Drug Administration (FDA) to determine if they will allow the release of genetically modified mosquitoes in the Keys. Therefore, it’s very important for you to comment on the FDA website about Mosquito Control’s plans.

Commenting on the FDA site is not difficult and we urge you to do so at your earliest convenience. Here’s what to do:

Please contact the FDA with your comments on the petition as soon as possible. Mosquito Control is waiting for the FDA’s ruling so it’s urgent that you let the FDA know about your concerns, and don’t forget to share this information with others!