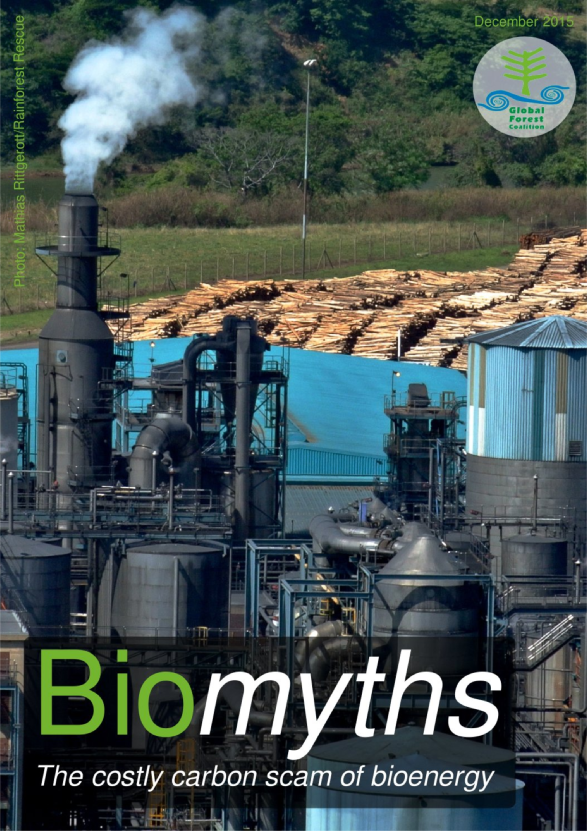 The Global Forest Coalition [1] has launched a new report at the Paris climate talks today titled “Biomyths, the Costly Carbon Scam of Bioenergy”. [2] The report exposes how large-scale bioenergy is being promoted as a replacement to some fossil fuels, based on what it calls the myth of its “carbon neutrality”.

“Accepting that large-scale bioenergy can be carbon neutral will permit power plants to go on pumping carbon emissions into the atmosphere whilst countries falsely claim that they are reducing emissions.” said Mary Lou Malig, Global Forest Coalition Campaigns Coordinator, who is currently attending the climate negotiations. “In combination with proposals like Bioenergy with Carbon Capture and Storage (BECCS), such claims turn any possible agreement that might come out of Paris into a fraudulent scam.”

“The low carbon myth has led to claims that bioenergy, in combination with CCS, can achieve “negative emissions” and therefore “offset” emissions from fossil fuel burning. The latest draft Paris agreement makes six references to “net” emissions reductions, leaving the door wide open to BECCS and other geoengineering technologies, which will only delay the real and absolute emissions reductions that are desperately needed right now.” adds Oliver Munnion, co-director of Biofuelwatch, a Global Forest Coalition member organization. [3]

The “Biomyths” report highlights that in the US and EU, bioenergy now accounts for the largest share of energy classed as renewable. The rapid growth in the industry is being driven by renewable energy targets and financial incentives that are now offered in most countries. [4] The International Energy Agency (IEA) anticipates that total primary bioenergy generation globally could more than triple by 2050, [5] driven by an increase in industrial-scale heat and power generation.

“The idea that burning trees for energy is good for the climate is a lie.” said Simone Lovera, executive director of the Global Forest Coalition. “As the report highlights, burning trees means releasing carbon that has been sequestered over decades straight into the atmosphere. On top of this, forests that are cut down or degraded lose much or all of their capacity to sequester carbon. We must reduce emissions now, not increase them through false solutions.”

The report provides an overview of current global industrial-scale bioenergy trends. Use and production are primarily in the US, the EU and Russia at present, but other regions such as Asia are gearing up to become heavily engaged in it, predominantly through the production, consumption and trade in industrial-scale wood-based biomass.

“Foreign investors are using the bioenergy boom, particularly in the EU, as an excuse for grabbing more land in Africa, South America and Southeast Asia, specifically to produce biomass for energy. We are already facing the detrimental environmental, social and economic impacts of large-scale bioenergy, which include deforestation, biodiversity loss, land grabbing, water contamination, reduced water availability, and the loss of food security and soil fertility.” warns Kureeba David, of the National Association of Professional Environmentalists in Uganda, a member group of the Global Forest Coalition.

← The French government told us a big lie, and we believed it
WATCH: Undercover police crack down on freedom of speech in Paris →