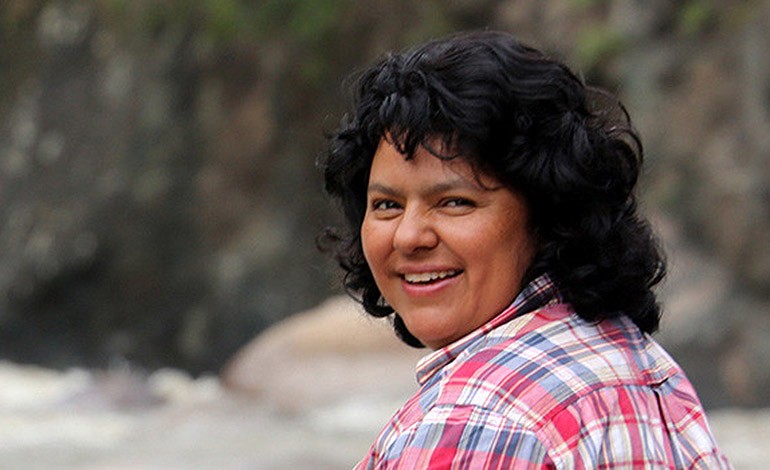 Note: More than five years after we first reported on the assassination of Berta Caceres, an ally in our work to defend the rights and lands of Indigenous Peoples in Central America, finally some justice has been won with the conviction of the man who masterminded her killing. Here is the original story we ran on the murder, and below is a piece from Toward Freedom on yesterday’s conviction.

CEO Found Guilty in Berta Cáceres Case: ‘No Justice Until the Mastermind Is Brought to Justice’

Laura Zúñiga Cáceres is still looking for the mastermind behind her mother’s assassination.

“Not having justice is painful,” Zúñiga said with the aid of an interpreter as she spoke in an exclusive interview with Toward Freedom from the Honduran capital city of Tegucigalpa prior to the verdict.

Her mother, Berta Cáceres, was an Indigenous activist whose work to defend the rights of the Lenca people in Honduras won her in 2015 the most prestigious award in environmental activism, the Goldman Environmental Prize. The following year, armed assailants burst into her home and murdered her.

On July 5, a Honduran jury found David Castillo, former chief executive officer of Desarrollos Energéticos Sociedad Anónima (DESA), guilty of being a collaborator in the murder. Castillo initially was charged as the mastermind behind the murder.

“There is no justice for my mother until the mastermind is brought to justice,” said Zúñiga, one of four of Cáceres’ children, after having sat through a few weeks of the state and the victim’s attorneys questioning witnesses. “David is not the mastermind.”

In fact, Zúñiga said “significant evidence” showed the involvement of the Atala Zablah family, which owns a soccer team and a bank. The family had injected millions of dollars into DESA and joined its board four years before Cáceres’ murder.

To read more visit Toward Freedom.