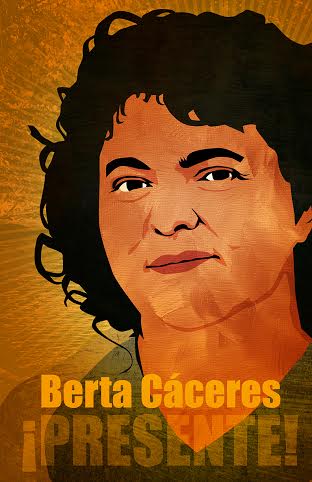 Today, March 8th is International Women’s Day. We celebrate the memory of Berta Caceres, a woman who dedicated her life to the people and land of Honduras. Caceres was murdered last week, with TreeHugger reporting the following:

Unfortunately, as Cáceres’ visibility increased, she became a target for the government – so much so that her colleagues maintained a eulogy on her behalf, should the worst come to pass.

Sadly, it did on Thursday, March 3, when she was shot at home in what local police called a robbery. Cáceres’ mother, however, says it was really “because of her struggle.” It is not difficult to believe that Cáceres was targeted, since Honduras is notorious for being the most dangerous country in the world for environmental activists. Between 2010 and 2014, 101 environmental campaigners have been killed in the country.

A rally of celebration for Caceres will take place today in Manhattan. Information on the event is available below.
WHAT: Berta Caceres Lives! Rally
WHEN: Tuesday, March 8th – International Women’s Day
noon – 12:30pm (followed by photo op in front of UN)
WHERE: UN Permanent Mission to Honduras
866 UN Plaza, Manhattan
49th Street between First Avenue and FDR (map below)
CONTENT: Civil society celebrates International Women’s Day demanding Justice for Berta Caceres, indigenous  leader of the Lenca People murdered in Honduras for her defense of sacred rivers against dams, Security for Gustavo Castro, wounded Mexican environmentalist and key witness to the murder, and Real Democracy and human rights in Honduras!
PHOTO OPS: Portraits of Berta and Gustavo in front of UN and mission; Diversity of activists with flowers and colorful banners.