Berta Cáceres Lives On, And So Does Violence By Honduran Government and Dam Company 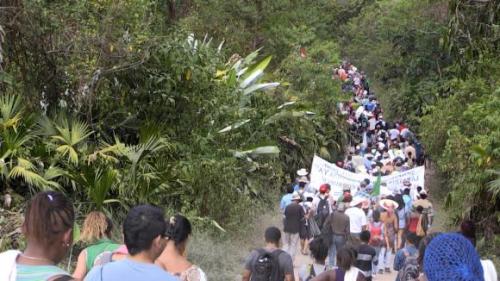 Fifteen hundred people from at least 22 countries convened in Honduras from April 13-15, 2016 for the “Peoples of ¡Berta Vive!” International Gathering. They came to honor slain global movement leader Berta Cáceres and to commit themselves to keeping her legacy alive.

Members of the international gathering also experienced the violence of the Honduran government and Desarrollos Energéticos S.A. – DESA, the foreign-backed company illegally constructing a dam on the indigenous ancestral Gualcarque River – which shadowed Berta throughout her final years and ended her life this past March 2.

The Civic Council of Popular and Indigenous Organizations of Honduras (COPINH), the group Berta founded in 1993 and ran until her assassination, and two other Honduran organizations hosted the gathering. The final declaration gave the context of the meeting.

In this land which has struggled for more than 500 years, with the sound of the free-running rivers, the strength of the mountains, the neighborhoods and communities; with the fury and tenderness of the beings of nature; with the spirit of the ancestors, and the hope and pain of men, children, and women [who are] all people of Berta… We are convened here for her memory and her rebellious life.

The forum combined presentations by COPINH leaders and members of Berta’s family; workshops on extraction and its prerequisite, militarization, on human rights, and on women’s power; a cultural presentation by the Afro-indigenous Garifuna; a videotaped message from Gustavo Castro Soto, Berta’s Mexican counterpart in environmental defense and the sole witness to her murder; and much more. A march through the capital of Tegucigalpa was loud, long, and invigorated.

The overarching message of the gathering was two-fold justice for Berta. This includes, first, the fair investigation and prosecution of Berta’s killers, both intellectual authors and paid hitmen. (Toward this end, COPINH and Berta’s family are requesting that the Honduran government allow the Inter-American Commission on Human Rights actively contribute to the legal process.) Second, justice for Berta means the fulfillment of what she lived and died for. In the short term, this is the cancellation of the dam project on the Gualcarque River. In the longer term, it means a liberatory transformation toward a human- and earth-centered economics, politics, and society in Honduras and around the world.

The Declaration of the International Peoples of “Berta Vive” characterized her contribution toward that transformation as her:

…ethics and practice… and her commitment to the peoples of the world. Her proposal for life was sustained by the radicality and honesty of her words; the profundity of her decolonized thoughts; her profound knowledge and great confidence in people who struggle; and the international horizon of her emancipatory vision.

Assault by Machetes and Rocks

The third day of the gathering, March 15, consisted of a procession to the Gualcarque River. Numerous busloads of farmers, environmentalists, anarchists, human rights observers, children, and others from throughout the Americas and Europe, including many Hondurans, traveled to the village of San Ramón, municipality of San Francisco Ojuera. This villages abuts the river from the north side, from which DESA is now constructing the dam. The internationally financed company moved operations after protests by the COPINH community of Rio Blanco, on the south side of the river, forced construction to a standstill.

During five years of dam-building operations in Rio Blanco, five people have been killed and four have been injured by DESA’s hired guns. Despite this non-prosecuted violence, DESA could not quash the opposition from the highly organized community. The dam construction is in violation of both the Honduran constitution and Convention 169 of the International Labor Organization, which grants free, prior, and informed consent before development or extraction may occur on indigenous lands.

San Francisco Ojuera, alternatively, is composed of campesinos/as who are not organized through COPINH. They do not identify as indigenous, and have not chosen to resist.

This past Friday, after having been arbitrarily stopped by police twice, and passing several phalanxes of soldiers in anti-riot gear, the caravan of vehicles parked and the crowd began the 45-or-so minute walk to the river. As the crowd approached a bend in the road, 20 or so goons – protected by about an equal number of Honduran national police – shook their machetes in the air. Some held rifles, sticks, and rocks. They voiced vicious statements about Black people and COPINH.

Among the group were individuals who had several times threatened Berta and other members of COPINH with death, according to a communique of April 16, 2016 by COPINH and the other conference organizers. The men and a few women called out that the “fly” had been killed, though she left behind a “plague.”

This was reminiscent of an attempted visit to the river by about 100 COPINH members, including Berta, on March 20. Then, police, soldiers, anti-riot special forces called the Tigres (created and funded by the US), and armed men in civilian clothes blocked their route and assaulted them.

According to testimony given to COPINH by contracted criminals, DESA pays 200 lempiras, or US$8.87, for a day’s work of violence and harassment of dam opponents. On this recent march, a well-known red truck belonging to DESA was parked next to police cars along the road to the river.

The hundreds of Honduran and international delegates continued down to the dam-threatened Gualcarque River despite the threat. There, some swam and others participated in a ceremony, led by Guatemalan Mayans, for Berta’s spirit and strength and for protection of the new COPINH leaders. Some of the armed men followed, filming the faces of delegation members.

As the visitors began to return from the river valley in late afternoon, the operatives became even more wild, lunging and screaming and thrusting their machetes. The police, who had been standing in front of the group to protect them,  now moved aside to let them loose. The men, some of whom were clearly drunk, began throwing rocks at delegation members’ heads, using their fists to beat others, and throwing still others on the ground and kicking them. One assailant slashed a delegation member’s wrist with his machete. Two men, within moments of each other, drew their machetes sharply to the top of the head of this writer, but halted inches above their target. Another attacker tried to slash his machete down on the arm of a Spanish activist, but one of the COPINH team was able to wrest the machete away.

Human rights reporters, after subsequent investigation, put the number of those wounded at 8 or 10. Throughout it all, COPINH members remained completely nonviolent and called for calm.

The policemen stood by all this while, doing nothing to stop the attacks. Then at a certain point, they began aggressively trying to push all those who had returned from the river back down the road to the buses.

However, many refused to leave because a group of delegation members still remained at the river. This included Tomas García, Berta’s successor as COPINH coordinator, whom the goons had been shouting that they wanted to attack. Dusk was approaching.

After some negotiation with caravan members, the police agreed to go collect the remainder at the river in their truck. They refused, though, to allow representatives of the delegation to ride along with them. This would have left the same police who had threatened and arrested Tomas in the past to have free access to him and other COPINH members. Pressure from the visitors finally prevailed, and they were allowed to ride along in the trucks. Everyone was shuttled up to the village safely.

There the safety ended. The police then actively joined the paid attackers. They shoved people and pointed their rifles at them, shouted and cursed them. On foot and in their trucks, policemen pushed the delegation down the road, driving so closely as to almost hit some of the retreating group.

A favorite expression of Berta’s was, “They fear us because we are fearless.” COPINH is not retreating in the face of this or countless earlier attacks.

The final declaration of the international gathering reflects this spirit. It says:

To all the peoples, men and women, we invite you with energy and ethical unity to strengthen the struggle. We will never give up hope. We will live toward a future of utopia with justice, liberty, and autonomy… on this land.
Please take action here to call for safety for members of COPINH and a fair, internationally led investigation into Berta Cáceres’ killing.

Copyleft Beverly Bell. You may reprint this article in whole or in part. Please credit any text or original research you use to Beverly Bell, Other Worlds.