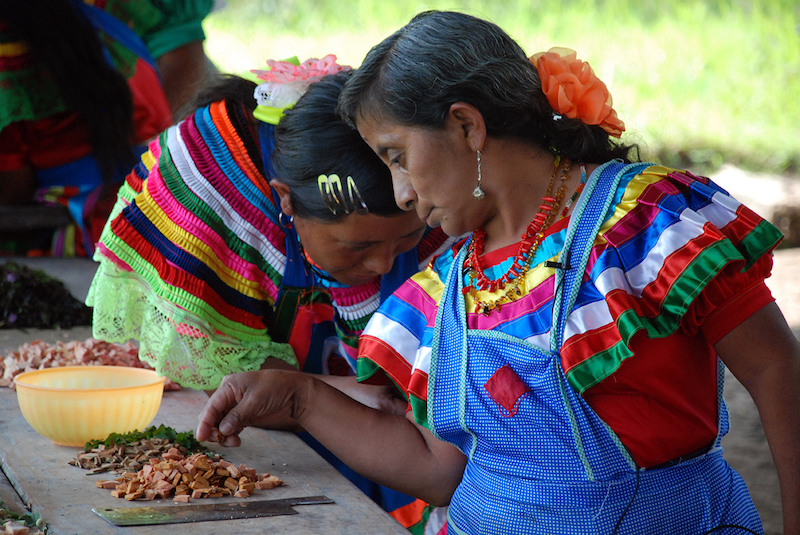 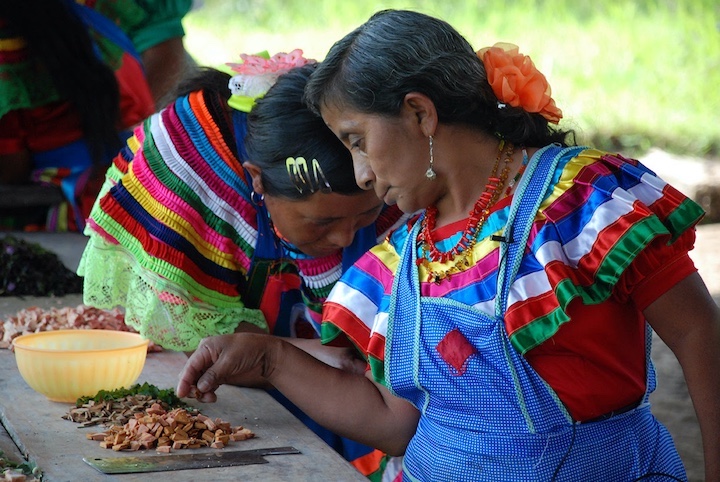 Traditional healers in Amador Hernandez prepare medicines from barks and other items harvested from the Lacandon jungle in Chiapas, Mexico. Photo: Langelle/photolangelle.org (2011)

This April marks the 10 year Anniversary of a GJEP delegation to the indigenous community Amador Hernandez in the Lacandon Jungle of Chiapas, Mexico. The GJEP delegation was documenting the resistance of the community to plans by the Mexican government to forcibly relocate them for a forest carbon offset scheme.  The scheme was part of a REDD (Reducing Emissions from Deforestation and Forest Degradation) agreement between California, Chiapas and Acre, Brazil to provide forest carbon offsets that would enable California industries to avoid cutting pollution. Indigenous Peoples around the world continue to oppose unjust REDD forest carbon offset projects.

Sergio Baffoni, Italian living in Germany, coordinates the campaign to protect Indonesian rain-forests, run by the Environmental Paper Network (EPN) together with around 150 national and international organisations.

Jen is a member of Cas Yikh (Grizzly Bear House) in the Gidimt’en (Bear/Wolf) Clan of the Wet’suwet’en people. Jen is currently living in Gidimt’en yintah in what is now known as northern British Columbia.

Sam Davis is a Conservation Scientist with Dogwood Alliance. A life-long treehugger, Sam earned a Ph.D. in Environmental Science in 2015 at Wright State University and completed a postdoc at University of California Merced before leaving academia for greener forests.

The US based company Corteva has genetically engineered a variety of maize using the gene editing technique CRISPR. This variety, known as waxy corn, originates in East and Southeast Asia where it is a major food crop. In the US it is a minor crop grown almost entirely for food starch and some industrial products.

As decision-makers develop recovery policies and investment plans, this day of action challenges leaders to go beyond recovery to a future where zero waste practices drive clean air and water, more and better jobs, and a healthy environment for our families and communities, where nothing and no one is wasted.

Another Indigenous activist has reportedly been killed this week in Honduras. Cerros Escalante was an anti-dam activist and part of the Honduras’ Lenca Indigenous community. Escalante is yet another example of the danger of being an Indigenous organizer taking on big companies and governments over the destruction of Indigenous lands.

This month marks the one year anniversary of the Covid-19 pandemic, following a grim milestone of half a million deaths in the United States alone. As we learn more about the origins of Covid-19, the link between deforestation and public health has become clear.

In 2016, GJEP took part in a series of community seminars organized by World Rainforest Movement on industrial tree plantations and GE trees around Sao Luis in Maranhao, Brazil the region where a US space center is currently planned to be expanded. This article gives an important history of the exploitation in the region and its link to the US space program.

POLITICO Article on the Dangers of Biomass

Here’s a multibillion-dollar question that could help determine the fate of the global climate: If a tree falls in a forest—and then it’s driven to a mill, where it’s chopped and chipped and compressed into wood pellets, which are then driven to a port and shipped across the ocean to be burned for electricity in European power plants—does it warm the planet?

The mission of the Campaign to Stop GE Trees is to protect forests and biodiversity, and provide support to communities threatened by the dangerous release of genetically engineered trees. This year we’re celebrating 21 years of movement building work to spread the word about the threat of GE trees. We’re coordinating a national alliance of organizations, scientists, Indigenous peoples and others who have come together with the goal of protecting wild forests, biodiversity and communities from GE trees. Join us as we build our movement to stop the dangerous release of GE trees.

Health Canada Proposes to Remove Regulation for Some GMOs

Lucy Sharratt is the Coordinator of the Canadian Biotechnology Action Network (CBAN), which brings together 16 groups to research, monitor and raise awareness about issues relating to genetic engineering in food and farming. CBAN is a project on the shared platform of MakeWay Charitable Society and a member of the national and international Campaign to Stop GE Trees.

The Center for Grassroots Organizing is a project for helping organize mass social movements. This means space where people from different fields can spend time together, share resources, get creative, and build collaborative strategy. A place for the explosion of radical youth leadership to feel at home and skill-up as organizers. A place to apply our dedication to racial justice with boots on the ground and proactively sharing resources. A place for all of us to connect with the farming and agricultural community, to reconfigure our relationship with our unstable food systems in readiness for the impacts of climate change. A place to work on defending the natural world from the impositions of the corporate world.