Note: See this follow up from NoNewAnimalLab.com, BREAKING: No New Animal Lab Fights Back Against Skanska SLAPP Injunction 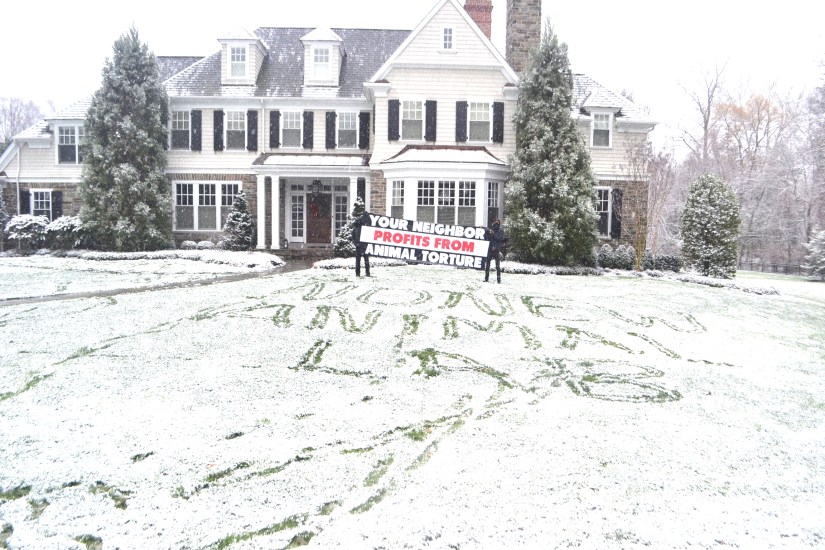 HUNTINGTON, NY – On the afternoon of Saturday, Jan. 16 animal rights defenders launched a march from Heckscher Park and immediately took the streets, which forced vehicles to see banners and signs that read “Your Neighbor Profits from Animal Torture” and “No New Animal Lab”. Every business window had a face of curiosity as to the protesters presence as they could hear the march coming well before they saw it.

After almost three miles of marching, around a hundred protesters descended upon the home of Skanska USA’s Richard Cavallaro. As the Chief Executive Officer, Cavallaro has the power to cancel the contract with the University of Washington (UW) to build an underground animal testing lab in Seattle, so-called Washingtoni. People from all over the so-called U.S. converged at his house to demand that he drop the contract and to call him out for literally building foundations for animal cruelty.

If built, this lab would increase UW’s capacity to hold animals by as much as 50 percent according to a Seattle Times articleii. The $90 million contract with Skanska USA is a drop in the bucket compared to Skanska USA’s revenue, which in 2014 weighed in at $7.3 billion. Looking at these figures and the fact that Skanska USA claims to be “…one of the largest, most financially sound construction and development companies in the U.Siii”, it is therefore realistic for Skanska to drop the contract with UW.

Protesters came at Cavallaro’s house from multiple directions, including two that approached from the back with a ladder. In a seeming attempt to reach the roof to deploy a banner, the two were tackled to the ground by private security. Their approach drew Cavallaro out of his home and Cavallaro in turn screamed at all the protesters.

As corporate figures that get to be removed from so much of the pain and suffering they implement through their construction projects, the emotional response from Cavallaro was very welcomed. The two protesters who attempted the banner deployment were charged with misdemeanor trespass and released within hours of the arrest.

The No New Animal Lab (NNAL) campaign launched just over a year ago when folks from NNAL disrupted a UW Board of Regents meeting. The meeting was disrupted after a King County Superior Court Judge determined that the previous Board of Regents meetings had violated the state’s Open Public Meetings Act 24 times over the course of 3 years.iv During one of those private meetings, they had decided to build the animal lab.

Skanska USA is no innocent target of NNAL. A multinational construction corporation, it is one of the few corporations that specializes in building underground animal labs. Not only does it specialize in building the labs, it openly supports vivisection and animal testing. Skanska USA is a willing and consenting accomplice in the torture of animals.

The mobilization at Richard Cavallaro’s home was a part of NNAL’s and the New York City Animal Defense League’s (NYC ADL) Swarm New York, a weekend of protest, mobilization, and home demonstrations. In the single weekend, an estimated 200 people protested outside of the flagship headquarters of Skanska USA in the Empire State building, screaming chants like, “Richard Cavallaro has blood on his hands” and “cut your ties with animal tests” to draw the attention of thousands of passersby as the evening grew dim.

That same night, in the New York University School of Law, trainings, speeches, and preparation for the rest of the weekend commenced. Bina Ahmad, a practicing attorney in the state of New York provided a comprehensive Know Your Rights training to prep those who would march to Cavallaro’s home the next day. Organizers from the NYC ADL spoke, sharing stories as to what keeps them going, keeps them fighting every day.

For Jay, one of the organizers, it was his legally rescued beagle, who had been tortured so severely that it took what seemed like forever for him to trust humans again. When he finally grew that trust, Jay broke down with tears of joy, knowing that his companion and friend could finally live without fear. It was these stories plus more from James Cromwell, actor, animal rights and eco-defender that filled people with the readiness to confront those who support animal abuse.

Following the almost six mile march on Saturday, in the freezing cold and snow, animal defenders went to the homes of those funding animal abuse in so-called Philadelphia. Pounding on doors with mega-phones in hand, it was impossible for neighbors not to learn their dark secrets.

William McNabb and Mortimer Buckley of Vanguard Group, a corporation that holds more shares of Skanska than any U.S. institution, received angry visits and warnings of more pressure to come if they do not divest from Skanska. With $1.12 billion dollars invested into Skanska, Vanguard Group can afford to lean in on Skanska to cancel construction of UW’s new animal lab.

As a construction corporation, Skanska seems to get its hands into many controversial projects. No amount of Leadership in Energy and Design (LEED) certification can excuse the level of industrial infrastructure this corporation is pushing out. In the northeast of the so-called U.S., local coalitions including Hudson Valley Earth First! And Protect Orange County are working together to stop the Skanska construction project of the CPV Valley Energy Center, a 650 megawatt natural gas power plant that would use fracked gas and be built in the Hudson Valley in so-called New York.

Although there is a ban on hydraulic-fracturing of natural gas in the so-called state of New York, the ban does not prevent infrastructure of natural gas use such as transport and use in power plants. Locals are working together to stop the plant from ever being built. For more info on the opposition, visit hudsonvalleyearthfirst.wordpress.com

Skanska’s will be hosting its shareholder’s meeting in Sweden this April. Organizers are requesting people to attend to keep building pressure on Skanska to abandon construction of the animal testing lab in Seattle. For up to date information on the No New Animal Lab’s pressure campaign visit nonewanimallab.com.