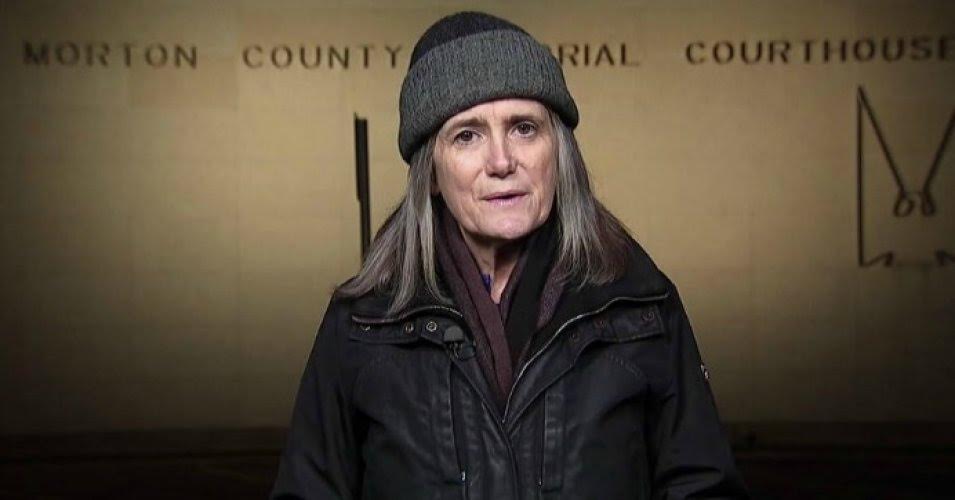 Goodman speaking at the Standing Rock protests about her arrest. (2016)

Goodman highlighted the importance of the role of journalism in our society—something that is a core of GJEP’s work through our Social Justice Media Program including the long time documentary photography of GJEP co-founder Orin Langelle and his Langelle Photography Program.

Freedom of speech and freedom of the press is vital to the functionality of our society. And now, more than ever, we must fight for that freedom. We have an administration that is trying everything in their power to limit and/or discredit any news that may be unflattering. Goodman explained that this is even more reason to stay critical, and to hold those in power accountable for their decisions.

Climate change and nuclear arms were on the menu as well. Goodman expressed her view that the press needs to be more critical on these issues. They are issues that go hand in hand, as she explained.

Climate change, a forbidden term in our current government, is fueling natural disasters at an unprecedented rate globally, and to ignore it is to ignore the constantly increasing death count. From this most recent disastrous hurricane season, to floods in Southeast Asia, to extreme drought and wildfires globally, we must address the horrors of climate change and climate denial. If journalists are distracted by the nuances of a dysfunctional administration, or reporting only on what will be financially beneficial to them or their advertisers, then who will give scientists the platform needed to bring the appropriate attention to this global concern?

Goodman also discussed how the media covers conflict and war, citing the praise given to President Trump after facilitating the bombing of an airstrip in Syria. It seems so strange to be vehemently critical of the president’s twitter account, but not his flippant attitude toward military force. We are living in a nuclear age, and the media must be meticulous about their research and reporting on such serious matters.

The Standing Rock protest was also a topic of discussion. Goodman described the scene, her reporting, and her arrest to ultimately keep her silent and keep information away from the general public.

The reason that issues such as war, climate change, and the rights of Indigenous and all disenfranchised groups in this country are not at the forefront of discussion on a daily basis is due to the corporate control of the media. Yes, the corporate media has often been critical of this administration and the general sociopolitical climate both domestically and globally. However, what they cover really comes down to what is going to make money. War makes money. Climate denial (or climate silence) allowing for increased reliance on natural resources makes money. Pipelines make money. Land grabs make money.

So, just as journalists and the media must be critical, so must the public. GJEP will continue to be a watchdog on these issues; spreading vital information to the public. We thank Amy Goodman, Democracy Now!, and all individuals and organizations that are putting up a fight for the planet and all of its inhabitants.