Americans, including Trump voters, want administration to take aggressive stance on corporate monopolies. See our report on the history of Monsanto and its potential merger partner Bayer here.

WASHINGTON, D.C. – A recently released poll shows that 9 in 10 Americans have serious concerns about the potential merger of major agrochemical companies Bayer AG and Monsanto. In a new Public Policy Polling (PPP) poll of 1,506 registered voters, Americans expressed overwhelmingly negative thoughts about the merger’s impacts on jobs, food safety, and independent farmers. The merger of Bayer and Monsanto is currently under review by the U.S. Department of Justice, and is one of three major potential mergers in the agribusiness industry currently under consideration. 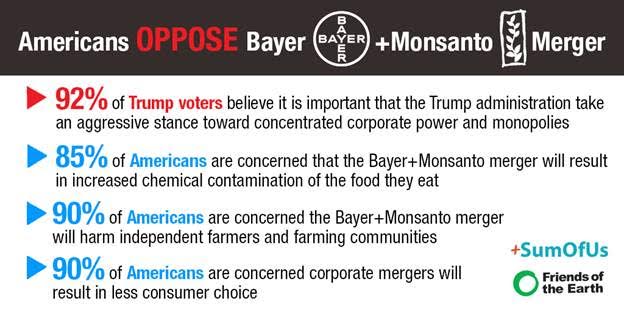 According to the poll:

“History shows that Bayer and Monsanto’s toxic mega-merger will be devastating for American consumers, farmers, workers and our environment,” said Tiffany Finck-Haynes, Food Futures Campaigner with Friends of the Earth. “It’s time for Trump to listen to the American people — including 92 percent of his voters — and protect our farmers and families instead of his corporate cronies.”

“The potential merger between Bayer and Monsanto is a massive threat to food supply and farmers around the world,” said Anne Isakowitsch, Campaign Manager at SumOfUs. “Now that Monsanto and Bayer are closer than ever to this potentially disastrous takeover of our global agricultural system, we must all step up our efforts and speak out. The future of farming and food safety depend on it. This deal has the capability to usher in a new era of sterile crops soaked in dangerous pesticides around the world; we cannot not simply allow this to happen.”

In a poll commissioned by Friends of the Earth and SumOfUs, PPP surveyed a demographically representative sample of 1,506 registered voters nationwide from June 1-4, 2017. The margin of error is +/- 2.5%. This poll was conducted by automated telephone interviews. Click here to read PPP’s memo on the poll.