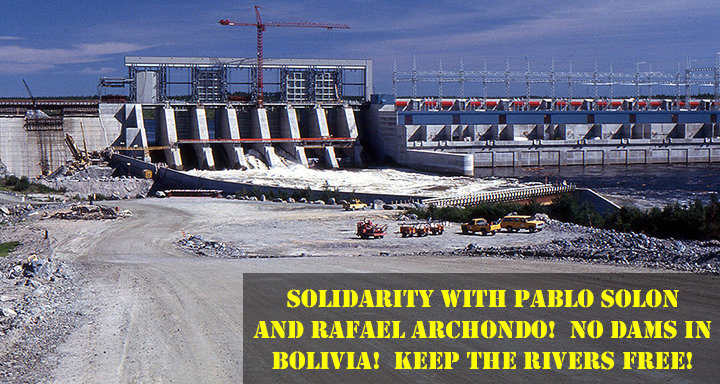 This week, Pablo Solon will be summoned for his first declaration before a prosecutor and could potentially be placed into preventative detention. Solon, Director of Fundación Solon, former Executive Director of Focus on the Global South, and former Bolivian Ambassador to the United Nations (UN), is being targeted by the Bolivian government for his vocal criticism of the government and the construction of two hydro-electric projects, El Bala and El Chapete in the Amazonian region.

From Focus on the Global South:

Solon resigned as Bolivia’s UN Ambassador in June 2011, and was succeeded by the Deputy Permanent Representative, Rafael Archondo. Archondo a very well known journalist, served as the interim representative for 14 months, until Sacha Llorenti, who was Minister of Government in September 2011 during the repression of the indigenous peoples’ march in defense of the National Park and Indigenous Territory of TIPNIS, was appointed as the new UN Ambassador.

The Vice Ministry of Transparency and Anti-Corruption has now decided to bring criminal charges with jail sentences of up to 4 years against Solon and Archondo, alleging that Solón “illegally appointed” Archondo and that Archondo committed the crime of “prolonging functions.” Both the accused have publicly responded showing that Archondo was appointed by the President of Bolivia as Deputy Permanent Representative to the UN and that he did not prolong in his functions.

Based on the studies done by Geodata, an Italian company hired by the government to identify where the dams will be built, Solon says they will “inundate an area five times larger than the city of La Paz, displace more than five thousand indigenous peoples, deforest more than one hundred thousand hectares and will not be profitable for the country with the current prices of electricity in Brazil.” 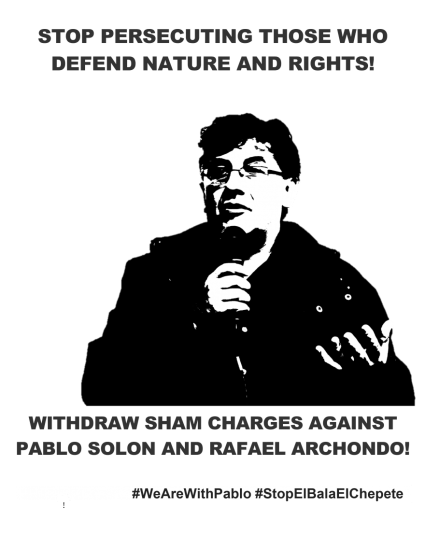 Salon says the most important thing is to link any statements of solidarity with him with denunciations of the proposed mega dam projects of Chepete and El Bala as that is the reason the government is making these false criminal accusations. It is also a deeply damaging project, socially and environmentally, that must be stopped. This week, Pablo is making his own formal complaint to the same Ministry that is accusing him (the Ministry of Justice and Transparency), asking them to investigate two contracts between the public state electric company ENDE and the Italian consultancy firm Geodata. Geodata’s own studies have shown that the projects are economically unviable and yet they are recommending their implementation.

According to Pablo, the following are good actions to take:

Suggested messaging that could be used in emails, letters and social media posts include:

It is also important to note the accusations against Pablo are not isolated; in fact a whole host of activist leaders, journalists and ex-government employees have been threatened with trial or had their organisations closed in recent years. Threats against climate activists fighting against hydroelectric dam projects have escalated to violence and death. In 2016, Civic Council of Popular and Indigenous Organizations of Honduras (COPINH) released the following as part of a statement on the assassination of activist Berta Cáceres:

On Friday, 30 June 2017 Cáceres daughter and new COPINH leader Bertha Zuñiga escaped an attack. The Guardian reports that “three assailants tried to attack the COPINH members with machetes after a black pickup truck forced them to stop by blocking the road. They managed to escape, but came under renewed attack as the driver of the pickup tried to force their vehicle off the cliff-edge road.”

A coalition of Bolivian social movements against government repression of movements and dissidents released the following statement in response to the government’s targeting of Salon. En español abajo.

“IN DEFENSE OF OUR FUNDAMENTAL CITIZEN RIGHTS”

As in the worst times of the dictatorship, today, we witness a government –  that is supposedly progressive and a defender of the rights of nature – persecuting groups, organizations, indigenous people and any that hold a critical stance or simply those who have dared to expose false words and actions, or the hypocritical politics labelled “living well” that contrasts with the framework of the laws that govern this country. Justice is no long on the side of those who speak out; today justice is on the side of those who destroy Nature.

We are even more indignant at the threat of closure of NGOs and institutions of critical thinking and defenders of rights. We are indignant about the threats of criminal trials for colleagues who have only exercised their rights to inform themselves and share their critiques and the trials of members of groups that defend their rights to a healthy environment. We are indignant at the trials of leaders who have not bowed their heads in defense of their territories, their watersheds and their environment and who have refused to align themselves with the predatory politics of predation and corporate power of economically powerful groups – no matter how this is dressed up as ‘indigenous and popular’.

Today, we denounce the persecution and demand a halt now!

As an Alternative Social Space, we stand in solidarity with our partners Rafael Archondo and Pablo Solón. We stand in solidarity with the Pastoral Social Caritas and the Youth Ministry of Tarija, with  CEDIB in Cochabamba, with the indigenous brothers and sisters of CEPM-B (Central de Pueblos Mojeños del Beni) , who today are starting a march in defense of its territory, the group of communities of the river Beni-Quiquibey, the Coordinator for the Defense of the Amazon, the movements of women who are constantly denouncing state machismo and the increasing violence against women’s bodies, and with independent journalists, among others fighting to defend the future of the country.  Each and every one of these must know that they are not alone and that their struggle is also ours.

We call on the entire Bolivian population to continue resisting and to hold true to the ideals of social change. We demand that the authorities required by law to respond to the people do so and do not become spokesmen for the regime of fear.