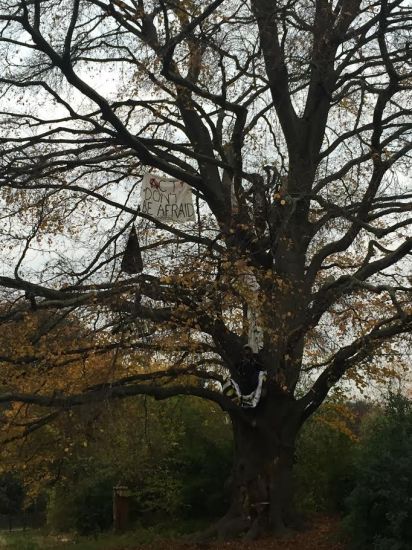 Early this morning, December 3rd, 2015, three activists from three separate forest occupation groups across Europe ascended a tree in Parc Monceau, a public park in Paris, France. Activists representing the Hambach forest occupation in Germany,  the Stop Fennovoima campaign in Pyhajoki, Finland, and the Tant Qu’il y Aura Des Boilles (As Long As There Are Swamps) campaign in France have come together to raise awareness of their separate campaigns and to urge governmental leaders to halt the exploitation and destruction of natural areas for energy use and development. This action is occurring during the first week of the  21st UN Conference of Parties (COP21), in which world leaders and corporate sponsors are gathering in Paris to discuss negotiations focusing primarily on carbon emissions.

Thousands of activists have converged in Paris, despite the current State of Emergency, to express disappointment with these official negotiations, many of whom believe the negotiations will not lead to any lasting or effective policy in addressing global climate change.  The activists currently occupying Parc Monceau wish for this action to call attention to the lack of progress in halting environmental destruction through legal means, and are asking for people all over the world to take action in their own communities in defense of the environment, and in opposition to the systems of capitalism, corruption, and oppression.

This action is also taken in memory of Remi Fraisse, a 21-year old French activist who was killed by a grenade thrown by police just over a year ago in October 2014.  Remi was a participant and member of the Tant Qu’il y Aura Des Boilles campaign, (also called the ZAD de Testet), a campaign aimed at preventing the construction of the massive Sivens Dam in southern France. If completed, the dam would flood a total of 100 acres of diverse and ecologically significant wetlands.

Remi’s death last year sparked a series of protests and public outrage. Remi’s death, as well as the numerous bodily injuries suffered by several members of the Hambach occupation in Germany, serves to demonstrate that those who speak out in the face of ecocide face ever-increasing threats and danger for their courage.

There, activists working to stop the clear-cutting of the Hambacher Forest and the development of lignite mines by the company RWE have faced broken fingers and teeth at the hands of police, as well as multiple unjust arrests and other forms of repression. Additionally, activists associated with the campaign to stop the construction of a new nuclear facility in Pyhajoki, Finland have had trees cut down with climbers still in them, and have also had their camp raided by private security guards with knives. The proposed facility, owned by Finnish company Fennovoima, would be the first new nuclear facility to be built since the meltdown disaster in Fukushima, Japan in 2011.

The ties between these campaigns for environmental defense are strong and evident. Each of these activists calls for a halt to governmental and corporate corruption and collusion, the dissolution of hierarchical structures, and the inspiration of peoples everywhere to take action in defense of their communities and ecosystems.