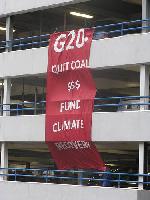 FROM THE MOBILIZATION FOR CLIMATE JUSTICE

Actions Spreading Across the U.S. Against Corporate-Driven Climate Policy

Pittsburgh, PA–As groups protest the Pittsburgh International Coal Conference days before the G-20 arrives in the city, additional actions against U.S. climate policy and the fossil fuels industry took place on both the east and west coasts.

In New York City, Climate SOS, New York Climate Action Group and Rising Tide North America protested what they called “a greenwashed U.S. climate agenda” at the opening of NYC Climate Week.  Activists distributed their version of the ACESA (American Clean Energy and Security Act) bill to event attendees and media in the form of fake $2 trillion bills [1] which subtly depict a collusion of prominent Green NGOs (NRDC, the Nature Conservancy, Environmental Defense Fund among others) with corporate backers of the bill (BP, Shell, Dow, and others). Climate SOS organizers Dr. Rachel Smolker and Dr. Maggie Zhou engaged ceremony patrons with a pointed critique of the bill’s corporate-friendly implications.

Meanwhile on the west coast, the Mobilization for Climate Justice also took action in San Francisco against Chevron and the corporate-driven U.S. climate bill. Activists blocked four lanes of traffic with a parachute-shaped banner which read “Climate Justice or Climate Chaos.”  “If Congress wants to protect the public interest, they would never consider adopting the current climate bill (ACESA) that was written by big oil and energy corporations in the first place,” said Carla Pérez of the Movement Generation Justice . “Cap and Trade legislation coupled with direct subsidies to oil, coal, nuclear, bio-fuels and incinerator industries will only serve to add hundreds of toxic smokestacks in our backyards, she added.”

Back in Pittsburgh, climate activists met in Schenley Park to set up the climate convergence–a space to talk about issues related to climate change and climate justice.  Part of this effort includes the New Voices on Climate Change program  of Global Justice Ecology Project. Anna Pinto, from CORE in India, who came to the U.S. for a speaking tour as part of the New Voices on Climate Change program [2] , explained why opening space to discuss climate justice is so important. “Climate justice is not abstract. It’s practical, it’s about survival.  It’s about need against greed,” Ms. Pinto explained. “Is it worth it to have three cars today to have your children die of horrible diseases tomorrow? Both the United States and Indian governments are pandering to the greed of industrialists and financiers rather than enabling ordinary people to provide for their needs,” she concluded.

Indigenous Environmental Network‘s Jihan Gearon, another New Voices on Climate Change participant, added her view on the centrality of climate justice within the discussion of climate change in the U.S.  “From extraction to transportation to refinement to distribution to consumption to storage, Indigenous Peoples are disproportionately impacted all along this road of destruction. The end result is contaminated and diminished food and water resources, forced removals, increased rates of illness and gridlocked economies,” she explained.”

Global warming and climate change pose yet another serious threat. The land of the Indigenous people in the arctic is literally melting under their feet, disrupting the life cycles of the plants and animals they depend on, and forcing coastal and island communities to abandon their homes and traditional lands. What happens to a culture when the land and environment it stems from no longer exists? Even more frightening is that the proposed solutions to climate change, such as carbon trading, nuclear power, and ‘clean’ coal technologies, will only exacerbate the problems we face,” she added.

The repression experienced by indigenous and marginalized communities around the world due to climate change and the fossil fuel economy is today being echoed in Pittsburgh as a result of the same G-20 countries that are the main drivers of climate change.  Activists with the Three Rivers Climate Convergence and Seeds of Peace  have been harassed and arrested numerous times over the past few weeks in the build up to the G-20 meetings later this week.

Protests across the U.S. demanding real, effective and just action on climate are expected to continue throughout the fall, to culminate on November 30th with massive non-violent civil disobedience actions nationally and internationally.

November 30th is significant as it is both the tenth anniversary of the historic shutdown of the WTO (World Trade Organization) meetings in Seattle and exactly one week before the UN Climate Conference in Copenhagen, where world leaders will meet to hammer out a new global agreement on climate.

Activists are joining together around the world to ensure that any new agreement on climate is devoted to real and just action to reduce greenhouse gas emissions, and not focused on corporate-controlled, profit-oriented false solutions to climate change.  Massive protests are being organized by the international network Climate Justice Action to occur during the UN meeting in Copenhagen, which some activists have begun to call “CorporateHaven” due to the overwhelming influence of industry in the climate debate.

[2] The New Voices on Climate Change speaking tour is co-sponsored by Global Exchange, Speak Out and the Mobilization for Climate Justice.  Its goal is to highlight and amplify the voices of people and communities impacted by climate change, the fossil fuel industry and profit-driven false solutions to climate change.