A Recipe for Burning the Planet. Cooked up by Kevin Conrad and the Aviation Industry

For the past 10 years, Kevin Conrad has been working to push a carbon trading mechanism called REDD through the UN Framework Convention on Climate Change. Last year, he turned his attention to the massively polluting aviation sector as a source of finance for REDD.

It’s a marriage made in hell. The aviation sector is one of the fastest growing sources of greenhouse gases. And it plans to get much bigger. The possibilities of reducing aviation emissions through technological changes or new fuels are remote, speculative, and largely a distraction from the urgent need to reduce the amount we fly.

But no industry wants to promote its own demise. And REDD offsets provide the perfect green figleaf for the aviation indsutry to appear to do something about its emissions, while continuing to expand, and continuing to pollute in ever larger amounts.

Aviation and forests
In December 2015, at COP21 in Paris, an organisation called the Shift Project (which has several corporate sponsors, including EDF, Vinci Autoroutes, Saint Gobain, and Vicat) arranged a side event with the title, “Can the aviation sector finance the protection of forests?”.

Here’s the panel of speakers:

Today we’re just going to look at Kevin Conrad’s presentation, the first speaker at the meeting. Brice Lalond, Special Advisor on sustainable development to the UN Global Compact, moderated the side event. Here’s how he introduced the event and the first speaker, Kevin Conrad:

This meeting here is a premiere, it’s the first time. We’re trying to have a sort of an agreement, or at least a meeting between two major players of climate change, of the problem on one side and of the solution on the other.

Two major players. One is the forest, as you know the forest is a very important asset in fighting climate change. And we have the aviation industry, which is not covered by the climate accords, but is nevertheless willing to compensate to diminish its footprint, perhaps to compensate.

And both represent a lot, the forests something like between 10 and 20% of emissions when you cut the forest and you cut the trees, aviation something between 2 and 3% of the emissions. So these two major players I would say, agreed to meet and are going to discuss.

We are having an initiative which actually is coming from the forest side. The forest side, we have here with us Mr. Kevin Conrad. Kevin Conrad is working with the Coalition of the Rainforest Nations. The Coalition of the Rainforest Nations is an important actor in the climate negotiations, Mr. Kevin Conrad here introduced in 2005, in Montreal in the negotiations, the idea that if you stop deforestation you contribute a lot to combatting climate change.

Brice Lalond seems like a nice chap. He used to be a green politician in France. But in his current role, he personifies the depths to which the United Nations has sunk in its obsequious grovelling to corporations.

Before the Earth Summit in 1992, the United Nations Centre on Transnational Corporations recommended that businesses should be internationally regulated.

In 2000, the UN set up its “Global Compact”, which allows corporate members to use the UN logo. But there are no binding commitments and no external assessment of what corporate members are up to. Self-regulation, in other words.

Brice Lalond, the UN Global Compact’s Special Advisor on Sustainable Development, is facilitating the aviation industry’s use of REDD credits to offset its emissions. In doing so, he and the UN are ignoring the fact that the industry plans to increase these emissions massively over the next few decades.

Emissions from aviation are anticipated to grow by 7.8 billion tonnes between 2020 and 2040. Here’s a graph produced by Annie Petsonk at Environmental Defense Fund using ICAO data (click on the image to go to the source, with more explanation of the graph): 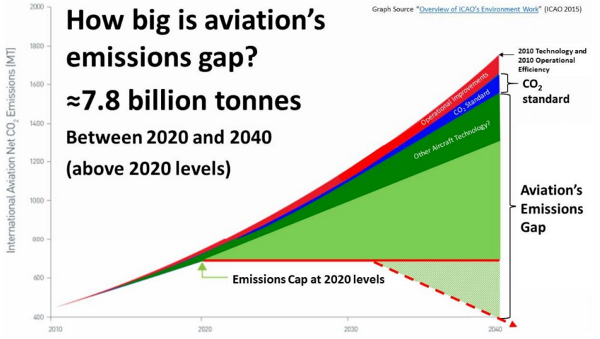 Petsonk explains that the dotted red line on the graph shows, “the kinds of reductions that will be needed if the sector is to bring emissions down to the dashed red arrow, along the lines of the Paris Climate Agreement”. The 7.8 billion tonnes emissions gap does not include these reductions.

Read the full article at Redd-Monitor.org