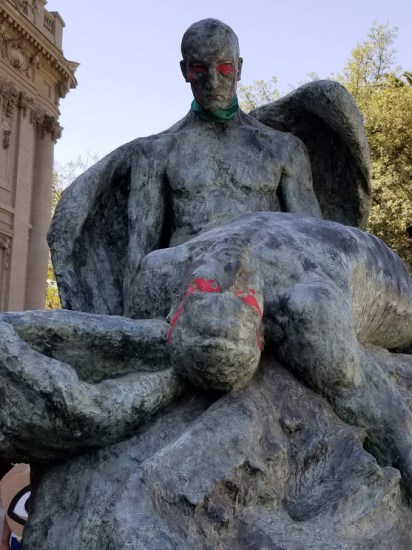 The United Nations climate negotiations in Madrid, Spain have reached a standstill, with the issues of loss and damage and market-based solutions to the climate crisis serving as major sticking points among participating nations. As a result, civil society groups representing impacted communities and their allies have begun protesting at the conference. As a gift for their activism, many have been banned from entering the conference premises. Think of loss and damage as comparable to reparations for paying back those who are and will be hurt the most by the impacts of climate change. The primary victims of the climate emergency are generally among those who contributed the least to that emergency.

In a speech given at a press conference on the sidelines of the climate negotiations in Madrid, youth climate activist Greta Thunberg summed up the importance of the issue.

GRETA THUNBERG: Countries are finding clever ways around having to take real action like double counting emissions reductions and moving their emissions overseas, and walking back on their promises to increase ambition or refusing to pay for solutions or loss and damage.

DIMITRI LASCARIS: And yet the notion of loss and damage is just one component of grassroots opposition to what’s going on in Madrid. The other part is the elephant in the room: The conference was not supposed to have been held in Spain to begin with; it was originally slated to take place in Santiago, Chile. Street protests too have broken out there. They have continued now for nearly two months straight, and radical action on climate change is one of the demands coming from the streets.

Here to break all of this down for us are two guests. Nafkote Dabi is Oxfam International’s Climate Change Policy Lead. And joining us from Santiago, Chile is Gary Hughes, the California Policy Monitor for the group Biofuelwatch where he focuses on forests, climate change and energy matters. Thank you both for joining us today.

GARY HUGHES: Thank you so much for having us. It’s really an honor to be with The Real News Network.