Chile is on the front lines of the “green energy revolution” which is driving social and ecological crises on the lands, mountains, deserts and rivers of the country. Photo: courtesy WRM

These excellent articles from World Rainforest Movement explain the details of how the green energy revolution is leading to an unimaginable increase in mining of minerals like lithium, copper and cobalt, necessary for solar panels, electric vehicles, wind turbines and other “green” alternatives. Through fake “biodiversity offsets”, this mining is being allowed to destroy critical biodiversity reserves and even the oceans to enable feel-good lifestyles in the North.

At GJEP we understand that there can be no solutions or green alternatives without first a massive reduction in the demand for energy, especially in the Global North and elites in the Global South. Without that, no energy alternative will be socially or ecologically just.

Time to Focus the Climate Negotiations on the Real Causes!

Government officials, corporate representatives, lobby agencies, multilateral banks, donor agencies and NGOs are now gathering in Madrid, Spain, for the 25th annual UN conference, pretending to address climate change. Meanwhile, protesters and Indigenous Mapuche in Chile –where the climate negotiations were supposed to be carried out– keep standing up against the neoliberal model imposed under the Pinochet dictatorship and demand that Chile be stripped of the Presidency of the UN negotiations due to the human rights abuses. At the conference in Madrid, the main goal of government negotiators is to finalize the UN’s Paris Agreement on Climate Change. These negotiations have failed to adopt decisions that ensure that emissions stop rising and that fossil carbon is no longer released into the atmosphere. Instead, the negotiations have given rise to false solutions that allow the destructive economic model that caused the current climate, environmental and social crisis to continue.

False solutions will not stop climate chaos. It is time to leave the fossil carbon in the ground! 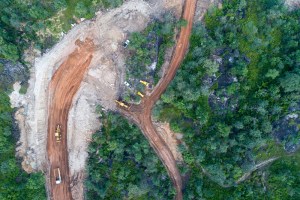 “Forest-Smart Mining”: The World Bank’s Strategy to Greenwash Destruction from Mining in Forests

An oxymoron describes “a phrase or statement that seems to say two opposite things.” The World Bank has a lot of experience with oxymorons and oxymoronic initiatives related to forests. With a report titled “Making Mining Forest-Smart” and the launch of a “Climate-Smart Mining Facility” in 2019, it is adding two more to its collection.

A Green Transition or an Expansion of Extraction?

Much has been said about the so-called “energy transition” towards zero-carbon emissions. Mounting pressure for addressing the very serious climate impacts of burning petroleum, coal and natural gas has led to more than 70 cities and countless companies and corporate networks pledging “carbon neutrality.” But what does this mean?